Android gamers, do you wish you could output your screen to an HDTV but don’t have a micro HDMI port? These days smartphones don’t necessarily need them if they have MHL technology built in, as many newer models do. With this technology one could output audio and video via the micro USB port as long as you have the right adapter.

This evening at CES I got a chance to see the StreamerXL from iBolt, a cord that can connect MHL-enabled phones to HD monitors or TVs. You can output anything from the OS to video to games. It can handle video up to 1080p at 60 fps.

Android phones with MHL technology out on the market now include the HTC Evo 3D, LG Optimus, HTC Rezound, the Galaxy line from Samsung (including the Nexus), and the HTC Flyer. 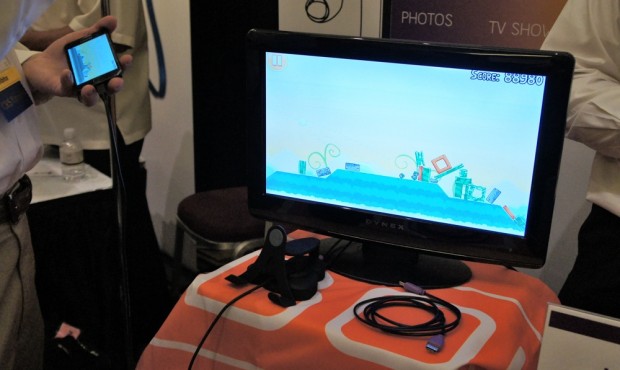 MHL stands for Mobile High-Definition Link, a standard being developed by a consortium of device manufacturers to allow for A/V connections that are connector agnostic, so you don’t need a specific port and can use an existing one. It By cutting down on the need for separate ports manufacturers can keep phones thin and simple while still offering perks like HDMI out.

The StreamerXL kit costs $49.95 and can be bought at Verizon Wireless stores and other electronics retailers.