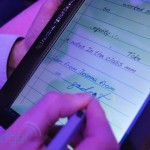 As most Tablet PC users know, a proper stylus and handwriting recognition are invaluable. A proper inking experience has been lacking on the latest generation of tablet devices, including the iPad. That might change in the near future as N-Trig is partnering with HTC (see the HTC Flyer) and others to provide an inking experience similar to what’s found on some Tablet PCs.

Our friend Joanna Stern from Engadget filmed a demo of an NVIDIA Tegra tablet prototype with an N-Trig digitizer built in. As you can see in the video, the scheme looks a lot like Windows own handwriting setup. Some apps will be optimized for handwriting, while others will require a pop up that resembles Windows’ TIP when you tap on a text-entry field.

Of course, a stylus and digitizer aren’t much good without proper apps. Adobe Journal is an app that lets users sketch and draw objects. PicSay Pro is an app that lets you write on photos and insert cartoon-like dialogue bubbles. Vision Objects looks to be the most useful of the bunch and is the one in the video that looks like a yellow note pad.