A study conducted by Boston Consulting Group reveals that a majority of consumers really want a Windows tab, giving Windows 8 a significant margin over its closest competitor, the iPad. Despite iPad controlling approximately 75% of the tablet market–Tim Cook announced that people are buying 3 out of every 4 tablets sold are iPads in his unveiling of the iPhone 4S–mind share statistics overwhelmingly favor Windows tablets by 15 percent. The big loser in this race? Android.

Earlier in the year, Forrester’s survey showed that 46% of consumers polled want a Windows tablet copared to 15% for iPad and 9% for Android. 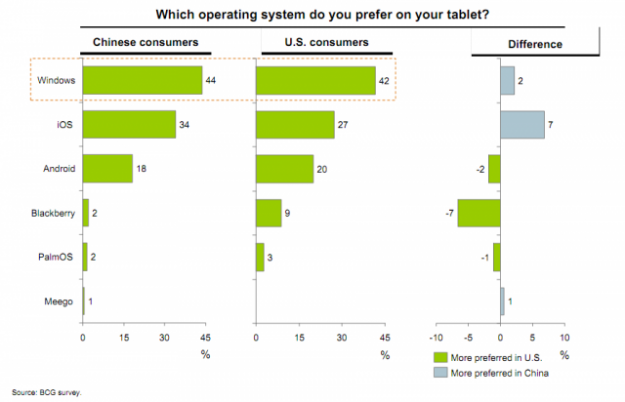 Given the iPad’s dominance in the tablet market right now against its main competitor, Android Honeycomb, it’s still too early to tell if Microsoft can translate buzz around Windows tablet into actual sales numbers. Microsoft helped to launch the tablet market over a decade ago with the Tablet PC, but expensive prices, short battery life, and compromises with weight and performance had dashed Bill Gates’ dream that every PC will be a tablet. However, if Microsoft can prove itself and translate early survey results into sales numbers, Windows tablets–which will be made by a number of PC manufacturers–can overtake the market dominating iPad by a significant margin, and that’s no easy task.

The Redmond, Washington Windows-maker debuted Windows 8 to positive media and consumer reaction earlier this year. Combined with more touch-friendly features, legacy pen input for professional and creative users, and a new Metro style user interface borrowed from Windows Phone 7, Windows 8 is Microsoft’s big bet as it tries to stop declining PC sales while at the same time tackling the post-PC era with a tablet worthy of competing against the iPad.

But Apple also has a big thing going for it, even if it’s OS may be compromised with trade-offs. Apple has buzz, hype, and marketing and the company has demonstrated that it can create products with emotional appeal. On paper, Windows 8 may be an attractive option, but can it win over hearts and tug at purse strings to translate into actual sales numbers?