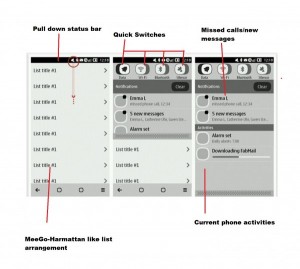 Leaked screenshots show that Nokia is working on a drop down notification bar for its Symbian^3 smartphones to be delivered with the Symbian Belle software update, depicting a notification bar that slides down similar to what is found currently on Android and also to what Apple will deliver with iOS 5.

The drop down notification menu, or what Nokia calls the ‘pull down status bar,’ includes quick switches, notifications, and activities.

Moreover, with the new design, Nokia’s notification system looks similar to that implemented by Samsung on Android with that company’s TouchWiz user interface overlay. Nokia’s quick switches are similar to the toggles on top of the TouchWiz notification pull down, allowing users to quickly toggle on and off WiFi, Bluetooth, mute, and data connection.

Just below the row of quick switches at the very top of the pull down status bar is a line that says ‘notifications’ and with a button that says ‘clear,’ presumably to clear all notifications and mark them as already having been addressed.

Just below the notifications is a list of on-going activities, which may show a download status bar if users are downloading something from the Internet.

While the notification implementation on Symbian^3 Belle is eerily similar to Android, TouchWiz, and iOS 5, it does show Nokia is willing to tweak its OS and UI to better compete with more modern, touch-friendly consumer operating systems. Additionally, the bubbly icons represented on Symbian Belle and Anna are also reminiscent of Samgsung’s TouchWiz, which adds a cartoon-like character to the overall OS.

Whether you love or haet the new Symbian Belle, the OS’s refreshed look and added features may help attract switchers coming from Android.