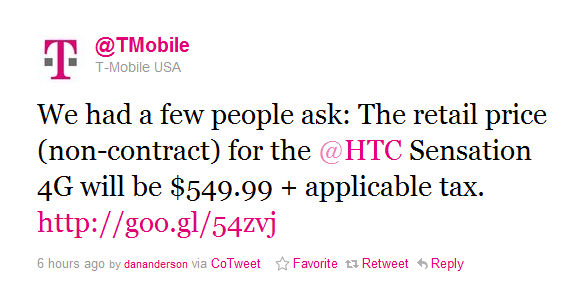 For those users who don’t want to be tied down to a 2-year agreement or who aren’t yet eligible to upgrade at discounted pricing, the HTC Sensation 4G will cost $549.99, according to a T-Mobile Twitter message.

The handset’s advanced specs and features should entice a few power users to switch up as it boasts a dual-core 1.2 GHz Qualcomm Snapdragon processor, a high resolution qHD display, and a capacious 4.3-inch screen that will support all the multimedia streaming on T-Mobile’s 4G HSPA+ network.

Word of caution though: be sure to get the appropriate data plan. Though T-Mobile markets its data plans as being unlimited, their is a metered component for fast 4G access; once you pass your allotted data per month, you won’t be charged overaged like on AT&T, but your data speeds will be severely down-throttled so you won’t experience the fast 4G speeds you’d expect.

The handset will be launching at WalMart on June 12th and at T-Mobile locations on June 15th.