T-Mobile has gone ahead and announced two new Android smartphones, the Samsung Exhibit 4G and the Samsung Gravity SMART with the former bringing T-Mobile an affordable Gingerbread offering and the latter offering customers an extremely cheap Android 2.2 Froyo device.

The specifications are pretty much what we expected from both devices. The Samsung Exhibit 4G is going to be powered by Android 2.3 Gingerbread and a single-core 1GHz processor and it will also have a 3MP rear camera with flash and a front-facing camera for video chatting purposes when it arrives sometime during the month of June. T-Mobile didn’t offer a specific release date. 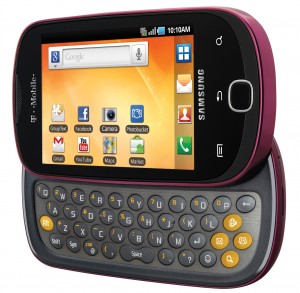 T-Mobile’s Samsung Exhibit 4G will cost 79.99 after a $50 mail-in-rebate with a two-year service agreement and qualifying voice and data plan.

As for the Samsung Gravity SMART, it’s going to be coming with Android 2.2 Froyo, 3.2-inch touch-screen display featuring Swype, a slide-out QWERTY keyboard, and a a 3-megapixel camera with LED flash.

The carrier did not offer a specific release date for the Gravity SMART either only saying that it will be out in June. The Lunar Gray model will cost will cost $29.99 with a two-year service agreement and qualifying voice and data plan and the Berry Red and Sapphire Blue colored devices will cost $69.99 after a $50 mail-in-rebate.

We’ve heard June 8th as the release date for both of these handsets, so it’s possible that that might be the launch date T-Mobile failed to announce.