If you own a Nexus S, run it on T-Mobile’s network and haven’t been able to get Google Talk’s video chat feature that arrived with the recent Android 2.3.4 update, well, you’re not alone.As a matter of fact, T-Mobile is blocking you from using the feature on its 3G network. 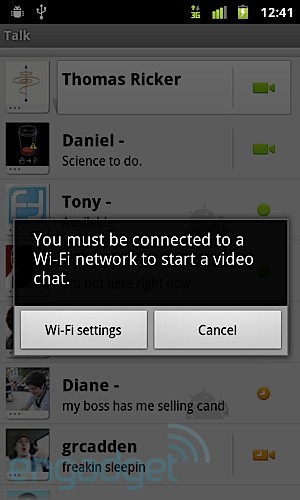 Engadget has confirmed that the Magenta carrier is in fact blocking the use of video chat over with Google’s new software. If you’ve tried to fire it up, you have probably been greeted with a nice little message reading: ‘You must be connected to a WiFi network to start a video chat.’

When Google announced the feature with the Android 2.3.4 roll out, they stated that it was up to carriers to allow or disallow the feature. Video chatting with Google Talk apparently works like a charm on Sprint’s Nexus S 4G.

T-Mobile hasn’t yet publically commented on why it’s blocking the service, but when they do, we’ll be sure to let you know.