T-Mobile today announced the Samsung Galaxy Note 2, Samsung’s 5.5-inch phablet, which will be heading to its network at some point in the weeks ahead. It did however say that it will be arriving sometime in the Fall which means that the device should arrive before December 21st, the first day of Winter. In addition, the press image reveals a date of November 15th which could end up being its release date.

Samsung originally said mid-November for the Galaxy Note 2 launch and that November 15th date is right square in the middle. 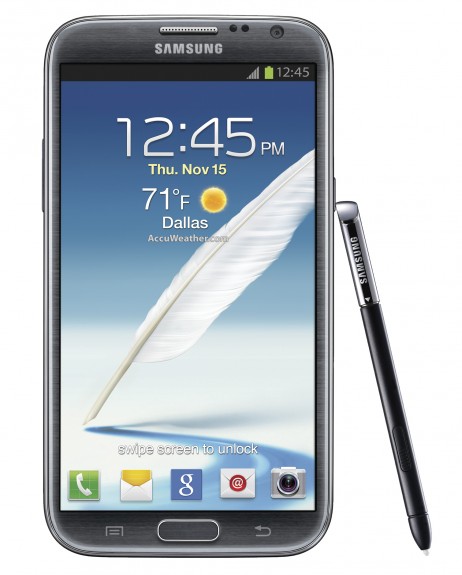 The November 15th date here could be telling.

In the announcement, the carrier also confirmed the specifications of the device but also left out some important details including release date information, pricing and whether or not it will have 4G LTE support. The latter was seemingly confirmed by an FCC filing but the carrier neglected to confirm whether the device will be future-proofed.

The Samsung Galaxy Note 2 for T-Mobile will be arriving with a 5.5-inch HD display, a quad-core processor clocked at 1.6GHz, a massive 3,300 mAh battery which provides up to 15 hours of talk time, dual-cameras, and of course, Android 4.1 Jelly Bean out of the box.

T-Mobile says that the Galaxy Note 2 will be its first device shipping with Android 4.1 Jelly Bean.

The carrier also confirmed the device’s design which will be similar to the Galaxy Note 2 that was released internationally earlier this month. That means that it will come with the rounded edges, a single home button and two navigation keys on the side.

As for launches on AT&T, Sprint, Verizon and U.S. Cellular, we haven’t heard anything just yet but Samsung will be hosting a Galaxy Note 2 U.S. launch event on October 24th and we should hear more about the Galaxy Note 2’s arrival then.