The Samsung Galaxy Note 2 release date on T-Mobile is all but confirmed for tomorrow now that retailer Wirefly says that it will start taking orders for the device starting at midnight tonight.

The third-party retailer dropped us a line saying that the Samsung Galaxy Note 2 for T-Mobile will go on sale at Midnight tonight (the order page isn’t live yet but will be tonight) which should mean that the carrier will announce something in the relatively near future regarding its specific pricing and release date. Wirefly says approximately that time so it could be a little before or after that it does go live.

Wirefly has not revealed how much the device will retail for but says that it will be cheaper than T-Mobile. The retailer also says that the device will be shipping out tomorrow for delivery meaning those who want the T-Mobile Galaxy Note 2 should be able to get it this week. 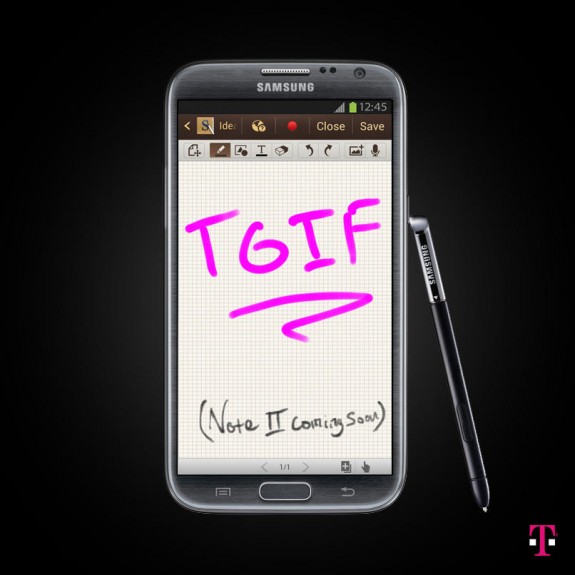 The T-Mobile Galaxy Note 2 will be available at Wirefly tonight, at the very least.

Keep in mind, T-Mobile has not announced anything yet so it’s unclear if it will go on sale there at midnight or not. At this point though, we have to assume that it wouldn’t give Wirefly a leg up on the release and that it too plans to launch the phablet at midnight tonight.

At the very least, customers will be able to go through Wirefly. The price will be below $299.99, but just how much lower, we can’t be sure of quite yet.

As for the rest of the Galaxy Note 2 launches in the United States, we know that AT&T will be releasing the Galaxy Note 2 on November 9th after a pre-order that starts on October 25th and Sprint will be releasing the phone on October 25th. Both carriers will offer it for $299.99 on-contract, the same price that T-Mobile is rumored to be offering it for.

U.S. Cellular will be offering it for $299.99 on-contract but the release date is unknown. Verizon will also be launching the Galaxy Note 2 though we still don’t have any information regarding its release date or pricing.

The Galaxy Note 2 is one of the most anticipated phones of the year and it will offer a massive 5.5-inch Super AMOLED HD display along with a quad-core processor, 4G LTE data speeds and Android 4.1 Jelly Bean.

It also offers brings a new ergonomic S-Pen stylus to the table as well.