We should point out that the sheet also mentions Android 4.1 Jelly Bean, a quad-core processor, and a 5.5-inch screen, all features coming with the Galaxy Note 2 that’s set to launch in the U.S.

However, that missing 4G LTE support may be a deal killer for those that were hoping to see a device capable of pulling down 4G LTE data speeds from T-Mobile when the carrier launches its 4G LTE network.

The carrier hasn’t yet revealed any specific date for its 4G LTE roll out but it’s expected to happen sometime during the first half of 2013. And while that may be a long ways away, we know of more than a few T-Mobile customers who were at least hoping that T-Mobile would include support.

Now, it appears that customers are going to have to sign a new two-year contract for a device that will be running on an outdated network in a few months time. 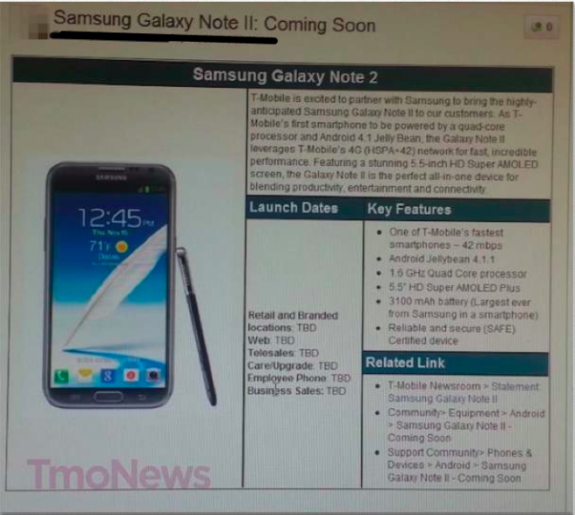 The T-Mobile Galaxy Note 2 may arrive without 4G LTE support.

HSPA+ 42 is by no means slow but it’s certainly not as fast as a 4G LTE network which provides data speeds that can reach up to 10 times faster than typical 3G speeds.

And by committing to 4G LTE next year, T-Mobile is acknowledging that 4G LTE and not HSPA+ is the future. And unfortunately, it looks like those looking to get the Galaxy Note 2 won’t be able to enjoy that future.

T-Mobile hasn’t confirmed anything yet so there still is hope for LTE support but at this point, it’s looking bleak.

If true, is this a deal breaker for you?