After announcing its evolved 4G network top 42 Mbps in Las Vegas at the Consumer Electronics Show, the U.S.’s fourth largest carrier may soon get a 21 Mbps-capable phone, up from the 14.4 Mbps cap on the T-Mobile G2 and myTouch 4G currently available today. The Vibrant Plus is an evolved Galaxy S smartphone and would sport identical looks to the Samsung Vibrant offered on the carrier today. As a Galaxy S smartphone, the device will come with a front-facing camera for video calling and integrated Qik video services. 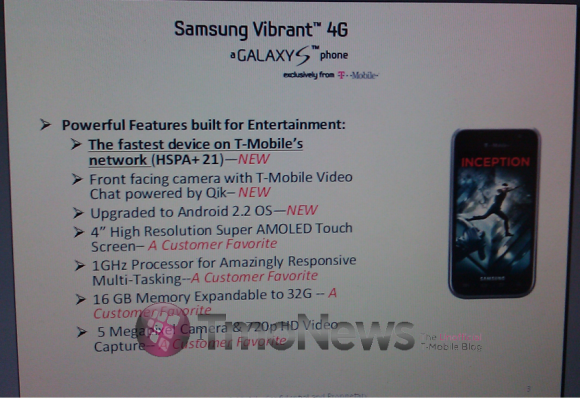 Unlike newer Samsung smartphones announced at CES for other carriers with an evolved AMOLED touchscreen called Super AMOLED Plus, the Vibrant Plus still sticks with the Super AMOLED display that was popularized through the initial Galaxy S series releases.

TmoNews had obtained information about this updated HSPA+ handset, though the news outlet did not get an official release date on the handset.

T-Mobile’s original Vibrant is one of the most popular Galaxy S variants in the U.S. It has sold 1 million units to date and is the best selling variant on a U.S. carrier.

Customers looking to upgrade will have to determine if the 21 Mbps theoretical network speed will be worthwhile and also if video chat and the inclusion of a front-facing camera will be important. While the international version of the Galaxy S has had the front-facing camera, U.S. GSM carriers T-Mobile and AT&T have both excluded the camera from their devices. The Vibrant 4G or Vibrant Plus will therefore seem to be a small refresh to the series.