No T-Mobile iPhone 5 at Launch, But Courting iPhone Owners

If dreams really do come true customers would be able to buy a T-Mobile iPhone 5 on September 21st, but a new T-mobile memo all but rules out that dream.

Despite courting iPhone users with unlocked iPhones and preparing a 4G network to advertise as iPhone Ready, T-Mobile maintains a love/hate relationship with the iPhone.

It’s not surprising to see the carrier court and fight against the iPhone. Verizon mocked the iPhone before ultimately selling the device, but T-Mobile goes a step further selling plans to owners of unlocked iPhones.

No T-Mobile iPhone 5 at Launch

TmoNews reports that T-Mobile employees are instructed to sell against the iPhone on September 21st, the rumored iPhone 5 release date.

It’s not clear what employees will be telling customers to sell against the iPhone 5 on September 21st, but if you really want a T-Mobile iPhone, an employee should be able to help, even though he won’t be able to sell you an iPhone. 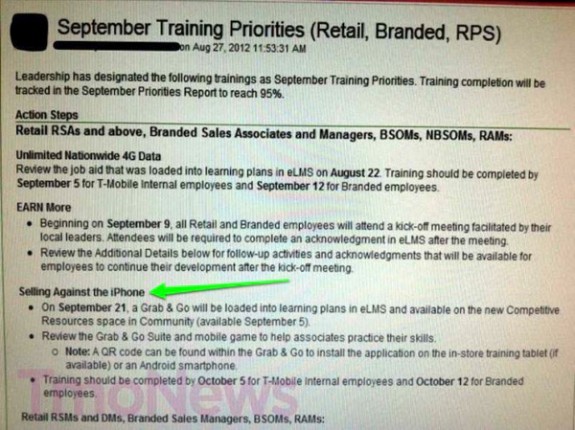 T-Mobile sells against the iPhone, a sign we won’t see a T-Mobile iPhone 5 in September.

It’s no surprise to see the push against the iPhone, but a few hours later T-Mobile sent another memo to employees outlining a new MicroSIM kit that works with the iPhone 4 and iPhone 4S. This new Monthly4G SIM Kit should hit stores on August 29th, allowing users to bring an unlocked iPhone 4 or iPhone 4S to T-Mobile.

T-Mobile is actively courting iPhone users, and should be able to deliver “4G” HSPA+ connectivity to iPhone users later this year, after receiving the 1900Mhz spectrum from AT&T for the failed merger.

The company tested the 4G network outside of Moscone Center back in June before Apple’s WWDC 2012 event kicked off, which was the first time T-Mobile iPhone users could use a connection faster than 2G. The 4G network is similar to AT&T’s 4G network, which is faster than 3G, but slower than 4G LTE.

T-Mobile appears ready to make good on the company’s promise to market to iPhone users. TmoNews posts a promotional flyer showing users the ability to save over $1,400 over 2 years by switching from AT&T to a T-Mobile powered iPhone. 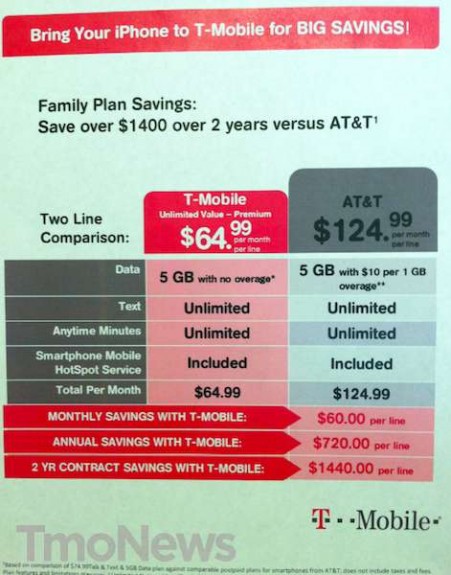 Rumors suggest the iPhone 5 will support 4G LTE connectivity, which is 10 times faster than 3G. Verizon, AT&T and Sprint already offer 4G LTE coverage, with Verizon coming out far in the lead. T-Mobile is reportedly testing its own 4G LTE network this summer. The network will launch in 2013, though no official dates are available.

Once T-Mobile offers a 4G LTE network, Apple could partner with the carrier for an iPhone 5 on T-Mobile, similar to the late iPhone 4 launch on AT&T. Even if this doesn’t happen, odds are good that T-Mobile’s 4G LTE network will work with the radio rumored for the new iPhone.

The T-Mobile Monthly 4G plans, which the new Micro SIMs work on offers a lot of value to users without a monthly contract, earning a top pick on our Best Prepaid Smartphone roundup and a positive review when paired with the Samsung Galaxy Nexus. 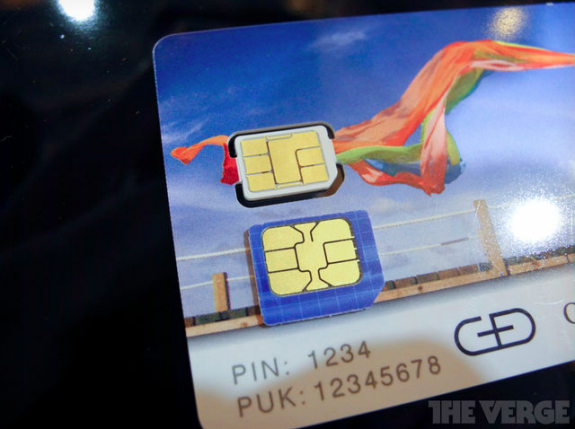 If the new iPhone uses the rumored Nano SIM standard users won’t be able to just pop in the Monthly 4G SIM kit, as the size is different. Speculation suggests users can cut the SIM down to fit the Nano SIM, just as many do with a Sim to Micro SIM cutter, so far no one has tried this. The Nano SIM image above, from The Verge, compares the size of the new SIM standard to the Micro SIM.

It will be interesting to see how T-Mobile responds to the iPhone 5, and what 2013 holds for the continual fourth place carrier. With over 1 million T-Mobile iPhone users as of one year ago, there’s clearly consumer interest in a T-Mobile iPhone 5. For now the relationship with Apple remains complicated but looking up.

The new iPhone, which earned the iPhone 5 name from press and consumers, is likely weeks away. Rumors point to a September 12th launch event and an iPhone 5 release date of September 21st. Preorders may start as early as September 12th for delivery on release day.

The new iPhone is rumored to feature a larger 4-inch display with a taller HDTV-like aspect ratio. The back of the new iPhone is metal, with a separation at the top and bottom according to leaked images. The new iPhone will likely be slightly taller and thinner, but the same width.

Leaks indicate the iPhone 5 will use the new Nano SIM and support 4G LTE connectivity in the U.S.

Check out our full iPhone 5 coverage for more details.