T-Mobile and LG announced their Android Honeycomb and 3D powered tablet, the G-Slate, all the way back in January at CES. However, they weren’t able to give anyone an up close and personal look at the goods. 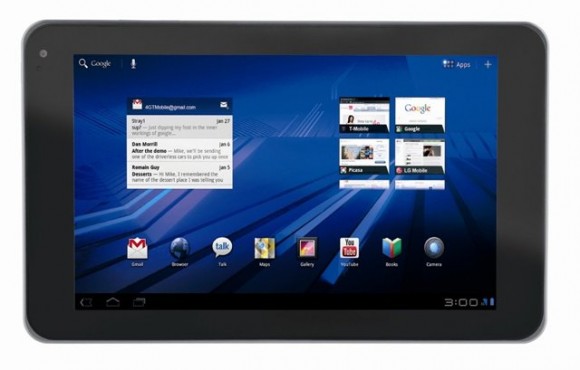 CTIA’s a different story though and T-Mobile was glad to show off their new tablet to us, a device that hopes to compete with the likes of the HTC EVO View 4G, Motorola Xoom and iPad 2.

The T-Mobile G-Slate is powered by a 1GHz dual-core NVIDIA Tegra 2 processor and it showed because the tablet was very fast and handled applications and Honeycomb beautifully. It’s not as thin as the iPad 2 or Samsung’s tablets but it definitely looks like it gets the job done.

It’ll also come equipped with dual rear 5 megapixel cameras that will allow for 3D video capture. The display on the actual device doesn’t support 3D which is a little disappointing and that means that it will need another device, say a 3DTV, in order to display 3D footage.

T-Mobile’s G-Slate will be out sometime this spring for $529.99 after rebate and a new two-year contract.