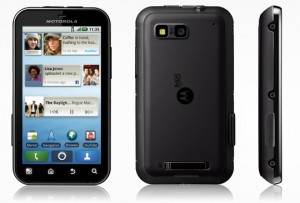 In addition to launching the T-Mobile myTouch 4G today, the self-proclaimed nation’s largest 4G carrier is also shipping the rugged, yet consumer oriented Motorola Defy, an Android 2.1 handset that begs to “defy” the elements and fit in with your fun and rugged lifestyle. I had a chance to play around a bit with the Defy at CTIA Fall 2010, and the handset definitely has a solid fit and feel to it, being dust proof, spill resistant, and drop proof. This would be Motorola’s second chic Android handset that has a rugged feel; the Defy will join the company of Sprint Nextel’s Motorola i1, which was launched in the Spring at CTIA.

Despite having a rugged body, the Defy doesn’t skimp out on features. It supports 3G on T-Mobile USA’s AWS spectrum and HSUPA for uploads up to 2 Mbps. Motorola also included the MOTO BLUR user interface on the Defy, giving the device widgets and deeper integration with social networking sites such as Twitter and Facebook. The device has a 3.7-inch FWVGA Gorilla Glass display, making it higher resolution than the Motorola i1, which only sports an HVGA resolution screen. Additionally, the Defy is powered by an 800 MHz CPU and can support up to a 32 GB micro SDHC memory card.

The best part about the Defy, in my opinion, is its price. I think the specs are pretty high-end as far as Android handsets are concerned, and the rugged element to the design is an added bonus. Being priced at $380 for a contract-free option or $100 after rebates and on a 2-year agreement with T-Mobile USA is a pretty good price, considering you’re getting something akin to Verizon Wireless’s Droid 2 (the Droid 2 has a faster 1 GHz processor as well) sans the sliding keyboard and adding the rugged build. If you’re looking for a smartphone that will complement your rough and tumble lifestyle, the Defy may be a good Android smartphone for you.

Of course, if it’s all about the “4G network,” you should also check out the myTouch 4G, which promises support for T-Mobile’s faster HSPA+ network.

We’ll have more coverage of the Motorola Defy coming up, but in the meantime, if you want to glimpse the phone, you can watch my hands-on with the device at CTIA.