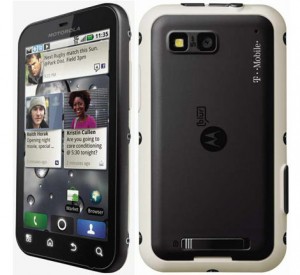 If you think rugged smartphones are big, bulky, and ugly–think again. The Motorola Defy is a rugged Android smartphone–the second for the company–that launches in a tuxedo black and white shell that stands up to your daily life and ‘defies’ what you throw at it, including any pre-conceptions for what rugged may look like. The Motorola Defy is available in the U.S. on T-Mobile USA’s network.

I apologize for the belated review of the Motorola Defy as the review was misplaced when I was transitioning to GottaBeMobile from another site that I had previously written for; The Defy was announced this past October at CTIA Fall, along with handsets like the Motorola Droid Pro for Verizon Wireless and the Motorola Bravo on AT&T.

The Motorola Defy is an impressive smartphone and improves on the specs of the company’s first rugged Android handset in the Sprint Motorola i1. The Defy offers a speedier processor, improved screen resolution, and world roaming capability thanks to T-Mobile’s use of GSM technology.

The device has a black front, which is dominated by a 3.7-inch WVGA capacitive touchscreen. The front itself is clean–right above the touchscreen you have a loud and capable earpiece speaker, in which calls came through clear, if not a bit crackly at the loudest of volume settings. Just below the screen, you have Android’s suite of four navigation buttons: Menu, Home, Back, and Search, outlined in white and backlit when touched.

The Defy’s rugged looks shows through. Along the sides of the phone, you see exposedd screws, highlighting that this phone could handle the elements. On the side–the upper third or so is black and the lower third or so is white, giving it a fashion-forward look to the device that makes it attractive, despite its industrial strength heritage. On the left hand side, you have a covered charge and sync port, which accommodates a micro USB plug. This cover itself is plastic.

On the top of the device, you have a long, but narrow, power button. The button itself is nice and firm. To the left of the power button, you have a covered 3.5 mm headphone jack–the cover is rubber.

On the right hand side, you have the volume toggle.

On the back of the Defy, a 5-megapixel camera with LED flash is present. The camera can record VGA images, and is comparable to the camera on either the Droid Pro or the Droid 2. The back of the device is also black, and features a soft-touch cover that can be removed via a sliding bar at the bottom–slide the bar to unlatch the cover, which will reveal the battery. Just underneath the battery, you have a SIM card tray and a micro SDHC card slot, which can accommodate cards up to 32 GB capacities. The camera and video camera interfaces are similar to those on the Droid X (also on the Droid 2 and Droid Pro), of which we’ve included the camera UI from the Droid X below:

Unfortunately, the video camera on the Defy maxes out at VGA resolution and doesn’t support 720p HD, but the UI is very similar to the one demoed below for the Motorola Droid X:

The Defy offers great performance with Android 2.1 and the 800 MHz processor. Performance felt on par with the Motorola Droid Pro on Verizon Wireless. The device was fluid, though it did pause on occassion when launching or opening an app. Most users will find that the performance of the phone is fast enough when using it daily to browse the Web, update Facebook and Twitter, make calls, and send emails and SMS messages.

Unfortunately, though, as the device uses the Android 2.1 operating system, this means that the Defy does not support Adobe Flash 10.1 Mobile as Android 2.2 is required at a minimum for Flash support.

The device comes with full MOTO BLUR support, which is the Motorola custom user interface overlay on top of Android. This gives the Defy up to seven home screens, conveniently placed soft keys for call and contacts that flank the app drawer on Android, and nice integration and tie-in with social networks such as Twitter, Facebook, and MySpace.

MOTO Blur Support, as demonstrated on the T-Mobile Motorola Charm:

Though different than the user interface on devices such as the Droid series on Verizon Wireless, MOTO BLUR is extremely similar and works in much of the same way. From our understanding, the difference is that the synchronizations and settings are done over Motorola’s servers rather than Verizon’s. Also, MOTO BLUR is more of a consumer UI than the widgets UI on the Droid series, and runs deeper. 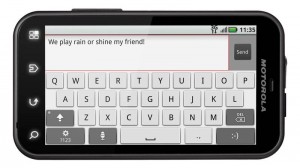 For instance, with MOTO BLUR, migrating between two MOTO BLUR devices will automatically transfer your settings, emails, and social networking log-on as it’s deeply integrated so you can migrate from a Motorola CLIQ to a Motorola Defy on T-Mobile USA without having to do much in terms of set up. While the appearance of the widgets UI on the Droid series on Verizon Wireless is similar to MOTO BLUR, it doesn’t run as deep and will not back up those settings and account information, meaning you’ll have to re-configure your log-in information if you upgrade devices. The MOTO BLUR user interface debuted on the original Motorola CLIQ, which marked the company’s entry into building Android smartphones.

Like the UI on the Droid series, you get a number of widgets, which can be re-sized to take up less room on a screen if you desire to fit multiple widgets on the same screen. Also, you get integrated social networking and a Unified inbox for emails, SMS, and social network feeds.

Video: Widgets UI on the Droid series; MOTO BLUR on the Defy is inherently similar, but offers some other features such as the backing up of settings, account log-ins, and apps

For more on the software side, you can check out our Droid Pro review as well. The slate form factor is also similar to the Motorola CLIQ XT on T-Mobile, though the CLIQ XT also includes a rear-facing optical trackpad.

The Motorola Defy is a svelte, stylish smartphone that boasts a lot of high-end features. When the device launched, it was priced at $99 on a two-year contract with T-Mobile. At that price point, the device will appeal to users who are interested in mid-range smartphones, which may have a slower processor and lower resolution screen, but will deliver high-end features. Essentially, for me, it was a Motorola Droid 2 without a keyboard that’s been ruggedized to deliver performance to those who abuse their smartphones.

While I prefer the more dense build of the Motorola i1 for Sprint-Nextel, the Defy is an extremely capable device made with a strong, rigid plastic body. The plastic gives the deceptive feel that this device is too light to handle the elements, but I’ve been able to answer and make calls in the pool, dropped the phone into a tub, and not worry about dropping the phone. In an age that’s defined by fragile glass, like that on the iPhone, the Defy offers consumers a refreshingly solid build quality while delivering a nice high-end experience at an affordable price point in an attractive package.