T-Mobile may become the only major network in the United States to not sell the iPhone starting next month and the carrier’s chief marketing officer doesn’t seem too pleased. He spoke about the issue at a conference yesterday and published an open letter on T-Mobile’s corporate blog.

T-Mobile CMO Cole Brodman began his presentation at Mobilize 2011 by going over some recent company highlights. When it was time to introduce the new devices he spoke at a very fast pace, reading from notes without a lot of passion. He introduced the Sonic 4G mobile hotspot, the HTC Amaze and a version of the Galaxy S II which are nice enough, but you can buy similar devices from any major carrier. 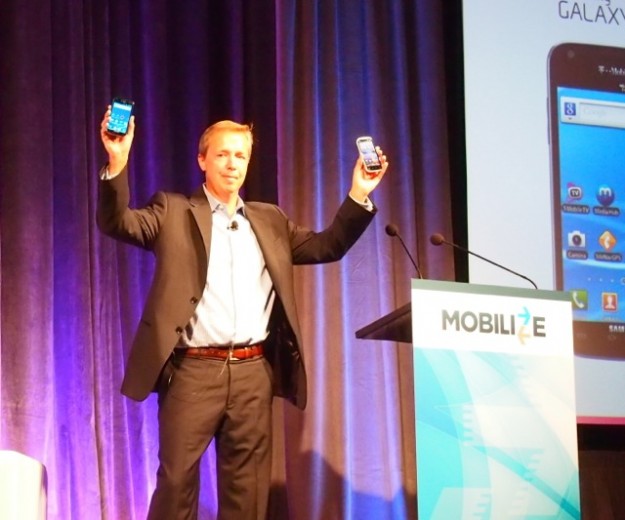 T-Mobile's CMO Introducing Two New Phones, Neither of Which is the iPhone 5

Starting next month, T-Mobile may become the only nationwide wireless network to not have an iPhone, assuming the rumors about Sprint getting the iPhone 5 are accurate. T-Mobile might brag about its success selling Android phones, but there’s a lot of people out there that will accept nothing but an iPhone. This isn’t a secret of course and Brodman sounds downright desperate.

After Brodman finished his presentation, Om Malik of GigaOm took the stage to chat about 4G. Malik immediately cracked a joke, asking Brodman if the new phones ran iOS. Brodman was not amused. After chatting about T-Mobile’s new devices, improved network speeds and the pending merger with AT&T, talk turned to the iPhone. Brodman was clearly disappointed that he couldn’t offer T-Mobile customers an iPhone and it became clear that there’s no T-mobile iPhone on the horizon. He said that T-Mobile’s expressed their desire to sell an iPhone and that the ball’s in Apple’s court.”We’re  waiting for that call,” he said.

AT&T is in the process of acquiring T-Mobile, which isn’t exactly an incentive for Apple to rush a T-Mobile variant of the iPhone 5 out the door.

Here are some excerpts from Brodman’s open letter:

We are interested in offering all of our customers a no-compromise iPhone experience on our network.

In the meantime, we continue to bring to market some of the most advanced, cutting-edge Android devices. Today, I had the chance to take the stage at the Mobilize event in San Francisco and introduce our fastest 4G smartphones ever, the Samsung Galaxy S II and the HTC Amaze. We’re very confident that these Android smartphones rival or beat any smartphone out there in terms of functionality, speed, overall experience and features – including the iPhone.

This is why, for now, our focus continues to be giving customers the best that Android has to offer…

The Android platform is certainly gaining traction, but Brodman and company are clearly settling here and are expecting at least some of their customers to do the same. We wouldn’t see these kinds of mixed messages if T-Mobile was so confident in Android phones offering a better overall experience than the iPhone. T-Mobile is about to be the odd man out when Apple introduces the iPhone 5 next Tuesday and it’s going to hurt.

Here’s a look at the  Galaxy S II that T-Mobile introduced yesterday.