It looks like T-Mobile might be gearing up to launch its next version of the Galaxy S Blaze, the Samsung Galaxy S Blaze Q, on August 15th.

A new press image, brought to the surface by TMoNews, reveals the Samsung Galaxy S Blaze Q in all of its glory. It also hints at a possible release date for the device though that information and the device itself officially remain up in the air.

The press image shows off an August 15th release date for the Galaxy S Blaze Q and not surprisingly, this is a date that has been tossed around before for T-Mobile’s upcoming QWERTY slider.

Companies often tease release dates on these press renders and it’s possible that that is what is at work here with the Galaxy S Blaze Q. 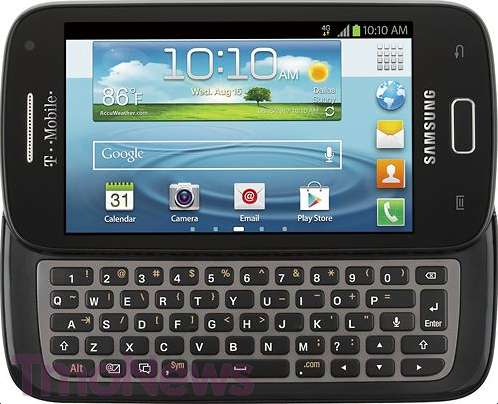 We won’t know for sure until T-Mobile says something but as of right now, the 15th is looking good.

The Galaxy S Blaze Q looks to be a very solid device for those who are still in need of a physical QWERTY slider on their smartphone. And while the specifications of the Galaxy S Blaze Q have not been confirmed as of yet, consumers are likely hoping that the rumored ones come true.

It is rumored to have a high resolution 720p HD screen and Android 4.0 Ice Cream Sandwich. This comes in addition to a rumored 1.5GHz dual-core Snapdragon S4 processor, 1GB RAM, and 16GB of storage space.

It also has a full 5-row QWERTY keyboard and is said to run on T-Mobile’s HSPA+42 network which is a step below 4G LTE in terms of speed.

All in all, it looks like a very capable device and one that could attract some attention if the price happens to be right. Knowing T-Mobile, it could end up charging a premium for the phone based on its specifications.

We’ll be on the look out for an official announcement.