There have been rumors swirling around about whether a T-Mobile Sony Xperia Z is on the way to the United States, complete with alleged photos showcasing the purported device. Today, even more evidence has seemingly cropped up, this time in the form of a possible sample image taken with the T-Mobile Xperia Z camera.

In January, Sony announced two new smartphones in the Sony Xperia Z and the Sony Xperia ZL. And while the Xperia ZL has been confirmed for arrival on at least one U.S. carrier, the Sony Xperia Z, which features a larger glass design, the Xperia Z remains without an official carrier in the U.S. Further complicating matters is that the unlocked Xperia Z that is currently available doesn’t support 4G LTE data speeds. The Xperia ZL, on the other hand, does.

The Sony Xperia Z may be coming to T-Mobile.

Despite nothing official coming out of Sony’s camp, there is reason to believe that the Sony Xperia Z may make it to shelves, and specifically on the network of the UnCarrier, T-Mobile. Earlier this month we saw purported images of a T-Mobile Sony Xperia Z emerge and now, there is seemingly more evidence of its existence.

Japanese site Blog of Mobile has discovered a photo on Picasa taken with a device called the C6606, thought to be the American version of the popular smartphone. The Sony Xperia Z, by comparison has model numbers of C6602 and CC6603. The image was taken with a Sony sensor, the Xperia Z features a Exmor RS 13MP sensor. 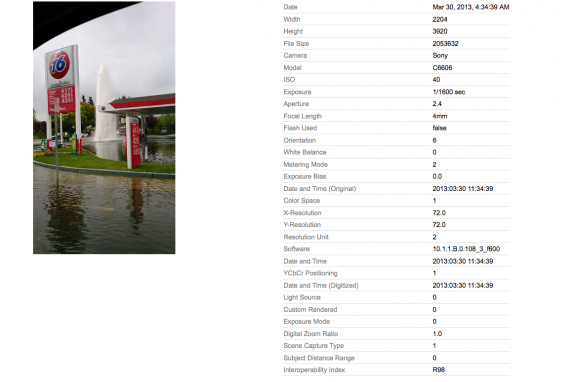 This photo may be from the T-Mobile Xperia Z’s camera.

So, it would appear that the photo in question is from the American variant of the Sony Xperia Z which means that it’s now up to T-Mobile to decide whether it wants to release the device or not. So far, the carrier has remained mum about a release of the Sony Xperia Z on its network. Previous rumors stated it was in a testing phases which may be the source of this photo.

As of yet though, it’s unclear if the device will ever officially make it onto T-Mobile’s network. Of course, there are plenty of consumers that are likely hoping that it does. The Sony Xperia Z has been one of the biggest surprises of the year, thanks in part to its fantastic hardware.

The Sony Xperia Z features a 5-inch 1080P HD display, 2GB of RAM, a 13MP rear facing camera and a 2MP front facing camera. Inside, it sports a 1.5GHz Snapdragon S4 quad-core processor and 16GB of storage with a Micro SD card for expansion. The Xperia Z includes a 2,330 mAh battery and support for 4G LTE speeds and connectivity. It also has a dust and water resistant design that is extremely thin.