Back in December, T-Mobile started selling the white Samsung Galaxy S II. The phone was only ever sold online and T-Mobile stores were stuck with the black model. Today you can walk into a store to buy the Galaxy S II in white.

The white Galaxy S II has the same specs as the black Galaxy S II, it just has a white coat of paint. It’s still the same 4.5-inch Android smartphone as it was before. If you buy the white version now, you’ll still be able to upgrade the phone to Android 4.0 Ice Cream Sandwich.

The white version is better if you don’t like fingerprints on the glossy areas of the phone. It also makes the phone stand out more against the sea of black smartphones. 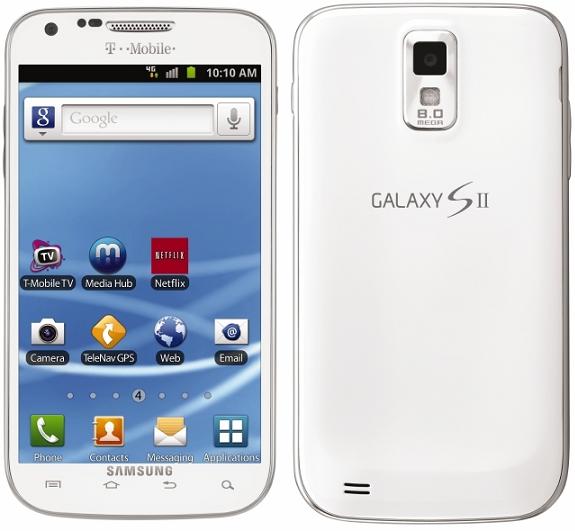 The Samsung Galaxy S II is arguably the best Android smartphone on T-Mobile at the moment. It is a few months old, but T-Mobile hasn’t received any new high-end phones since it was released. The only fault of the phone is the screen resolution, a 480×800 resolution on such a large display means it’s be easier to see individual pixels.

If you don’t need to have something like a Retina Display, where you can’t see individual pixels, the Galaxy S II could be the phone for you. If you don’t need a Retina Display, but still want a display with more pixels per inch and you want to use T-Mobile you’ll want to wait for the Samsung Galaxy S Blaze, which is a very similar phone with a few minor changes in size, camera, and display.

It should be available on T-Mobile in the near future.