The motto at T-Mobile today is apparently “Out with the old, in with the new” as the carrier has seemingly killed off one device while adding another in the form of the inexpensive T-Mobile Concord.

T-Mobile’s latest off-contract smartphone is the ZTE-made T-Mobile Concord which will be hitting Target stores on August 26th for a mere $99.99 off-contract.

Oddly enough, the device is already available at Walmart stores for $99.98 when its paired with a Walmart Family Mobile no annual contract plan. 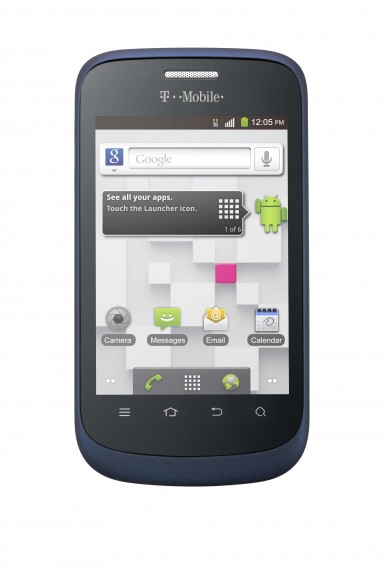 The T-Mobile Concord is now available at Walmart.

The T-Mobile Concord is not aimed at those who are looking for a high-end smartphone. Instead, the device is going to be appealing to those who might be buying an Android smartphone for the first time who couldn’t care less about top of the line hardware and current software.

The device is going to be coming with a 3.5-inch capacitive touchscreen display and and a 2-megapixel camera in the rear. It’ll feature 3G connectivity, not HSPA+, and it will be running Android 2.3 Gingerbread with no promise of an upgrade to Android 4.0 Ice Cream Sandwich.

Customers will be able to pair it with a T-Mobile single-line, Monthly4G no annual contract plan which will provide unlimited data, text and calling.

The introduction of the T-Mobile Concord comes on a day when T-Mobile apparently canceled another Android smartphone, the Galaxy Note.

T-Mobile’s 5.3-inch phablet was launched earlier this month amongst a lot of fanfare, however, the carrier pulled the device from its website without explanation and it now appears it’s because it canceled the device altogether, possibly in favor of the upcoming Samsung Galaxy Note 2.