In a move that is upsetting customers, T-Mobile USA is beginning to push advertisement to customers through the Android notification bar on their phones. The move would make T-Mobile the first major U.S. carrier to begin deploying obtrusive ads to customers as its main rivals–Sprint, Verizon Wireless, and AT&T Mobility–do not employ such tactics at this time. If there is even a positive spin on this story, the plus side is that ads so far are for T-Mobile branded services, like T-Mobile’s VIP Zone, and are not for third-party products, services, or promotions. 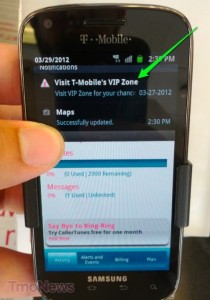 Customers who had updated their T-Mobile My Account app had begun to notice the ads appearing. Prior to updating the T-Mobile app, ads were only shown within the app itself, but now ads are now also appearing on the Android notification bar.

The new notification bar ads open up a new area of concern in an era where unlimited data plans are a thing of the past. Though T-Mobile USA market their plans as ‘unlimited plans,’ customers who exceed a certain data cap each month are throttled for the remainder of the month. If T-Mobile does expand advertising beyond its services, it’s unclear if the ads that get pushed to customers will be counted towards this data cap for throttling.

The move to bring ads to the notification bar is something that isn’t new. Various third-party apps from the Play Store have already begun employing this strategy.