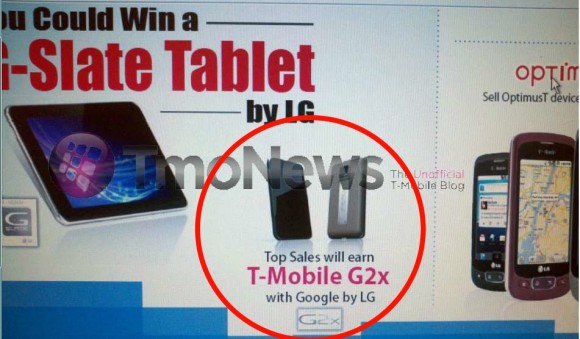 It looks like T-Mobile USA will be expanding its G-franchise with a new smartphone that was leaked as the LG G2X. The fourth largest U.S. carrier which operates the second largest GSM network in the country already has another G product in its lineup, also from LG, in the form of the G-Slate. The G-Slate is an Android 3.0 Honeycomb tablet that will take on the likes of the Motorola Xoom on Verizon Wireless and the Galaxy Tab 10.1 from rival Korean consumer electronics-maker Samsung.

The LG G2X looks like it will be a re-badged LG Optimus 2X smartphone. The re-branding is akin to T-Mobile adopting the Optimus Pad as the LG G-Slate for the U.S. market.

If in fact the LG G2X is a derivative of the Optimus 2X, it will support a dual-core Tegra 2 ARM-based CPU with GeForce GPU from NVIDIA.

The handset is expected to be a 3G/4G smartphone operating on the carrier’s evolved HSPA+ network, which is based on a 3G protocol but delivers mobile broadband data access speeds closer to 4G capabilities.