As the sole carrier left without an iPhone in its portfolio, T-Mobile will be making up for lost ground come this November with a massive roll out of multiple Android smartphone and tablet models. Deployment of new devices actually begin in October with several feature models and November will usher in the remainder of T-Mobile’s products for launch before the start of the holiday shopping season. 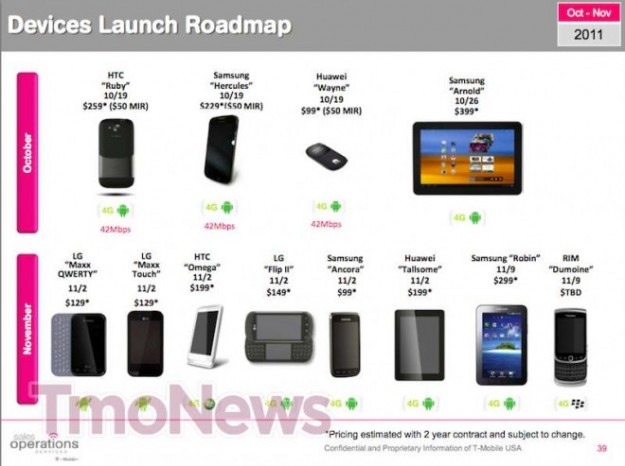 According to the leaked roadmap, the HTC Ruby, also known as the Amaze 4G, will launch on October 19th for $259 after a $50 rebate. The carrier will also launch its Galaxy S II model, known as the Samsung Hercules, on that date for $229 following a $50 mail-in-rebate. The difference between T-Mobile’s Hercules and the rest of the Galaxy S II models is that it will sport a dual-core 1.5 GHz Qualcomm Snapdragon S3 mobile CPU rather than Samsung’s Exynos processor alongside a larger 4.52-inch display compared to the international S II’s 4.3-inch Super AMOLED Plus screen. A mobile hotspot will also launch on the 19th and come the 26th, T-Mobile will launch its own 4G HSPA+ capable Samsung Galaxy Tab 10.1 slate known as the Arnold. The Arnold will compete against AT&T’s 10-inch HTC Jetstream and Verizon’s 4G LTE Galaxy Tab 10.1.

For November, we’ll see more budget-friendly launches. The first two phones, rumored to be joining the myTouch smartphone product line, will be made by LG and will cost $129 each. The LG Maxx QWERTY and Maxx Touch will either have a landscape-oriented QWERTY keyboard or a touchscreen-only form factor respectively. Both models will feature a 1 GHz CPU according to prior leaks, and the Maxx QWERTY is said to have a keyboard with keys that measure 92% the size of standard keyboard keys.

T-Mobile will also launch the HTC Omega on November 2 for $199, which is a smaller Windows Phone 7 model compared to the larger HTC HD7.

The LG Flip II, which we’ve seen rumored before, will feature a top touchscreen and a bottom touchscreen that’s flanked by a split keyboard in a somewhat unusual form factor. That device is also slated for a November 2nd launch for $149.

A mid-range Samsung Ancora will launch on the same date for $99 as well.

The Huawei Tallsome tablet is slated for a $199 asking price also on 11/2. A Samsung Galaxy Tab 7 Plus will follow on 11/9 for a price tag of $299. Also on the 9th of November, the carrier is expected to launch its Torch slider phone from BlackBerry called the Dumoine, which looks similar to AT&T’s BlackBerry Torch 9810.