The new game lets players enjoy playing with their friends in the same room while playing a game on their tablet. Eon Altar uses up to six tablets as substitutes for character sheets, dice, miniatures and grid maps. Players choose one tablet to use a game board and they can use their own tablets or smartphones to control their individual characters.

Players move their characters around on the tablet in the center of the group, but once they enter combat they control the game through their tablet. The team uses a giant Windows 8 tablet for the game board and iPad minis for each player in the launch video.

Like a pen and paper RPG, Eon Altar players will roll dice to see how well they perform in combat. Dice rolls are all virtual, and only use six-sided dice to determine successes. Traditionalists will miss the feel of dice in their hand and the 20-sided dice Dungeons & Dragons uses, but Eon Altar will likely have a broader appeal than pen and paper games.

The story of Eon Altar has players delving deep into a dungeon to fulfill their individual goals. There is no Dungeon Master, so each player controls one of five characters as they traverse the dungeon. 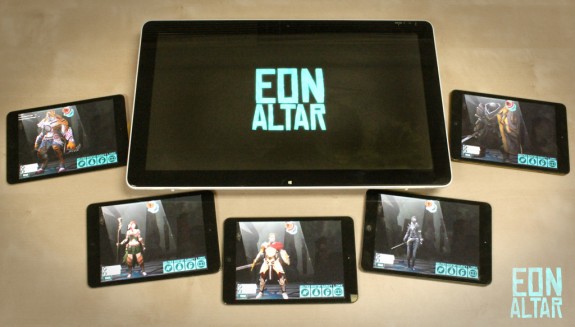 Eon Altar sounds like a perfect use for big Windows 8 tablets like the Lenovo IdeaCentre Horizon. Gamers can use any device as the game board, but a large touchscreen would make gameplay much easier.  The table concept Lenovo showed at CES with the Horizon would also be perfect for the game, so gamers have a place to rest their individual tablets or smartphones.

There is no announced release date for Eon Altar, but the developer Fly Helmet Games says it will work on current and next generation devices when it does release. The equipment needed makes the game very expensive, but for users whose friends have the devices required, it looks like a lot of fun.