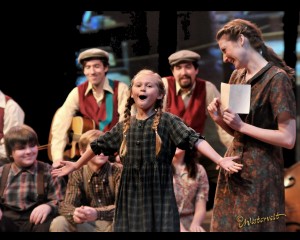 Each year at the theatre I helm, we present an annual Christmas Show. Nothing new about that as we do shows all the time. The thing that makes each Christmas Show a little crazier than the others we do is that this holiday extravaganza involves a large number of children in the show. This year we doubled up the stress by producing a world premiere that had never been seen before called Glory Bea! A Shenandoah Christmas Story.

But the purpose of this post is to talk about Tablet questions and how they come out of that experience. Because of the children’s involvement we also have a lot of parents around the rehearsal process. They see me using an iPad 2 in rehearsal for my script and note taking. From three sets of parents I got all kinds of questions about the iPad 2 because they are thinking about getting one for their kids this Christmas. Watching the director wave one around in rehearsal certainly whets the appetite of the young ones. (Perhaps I should get a commission.)

I also get asked about the iPad 2 and Tablets during the preview performances from audience members who see me toting one around. Just as with Tablet PCs they are great conversation starters.

Most of the questions centered around two themes: price point and price point. Yep, the cost was the biggest thing. First it was about the initial cost of the device. One parent wanted to know if the iPad 2 was worth it over other Tablets like the Kindle Fire and of course we had the “it depends on what you want to do with the Tablet” discussion.

The second part of that price point theme had to do with the cost of Apps. Everyone knows about Apps but they wonder about the cost. When I explained that it depended on the App and that there were some free ad supported Apps, there was resistance to having ads presented to their children. Some are considering a Tablet as a family device, not a solitary gift to a child. I think that points to something we need to see in the future, which is allowing multiple profiles or user accounts on these devices.

Intriguingly all but one of the individuals I talked to use an Android smartphone (the other uses a Blackberry). I asked them what they thought of their experiences with Android and by and large they seemed genuinely satisfied, but were very interested in flirting with Apple and iOS. One conversation pointed to the fact that Apple seemed to have a better reputation with parental controls. Two had very negative feelings about Apple that I can best describe as coming from a perception that everything Apple sells is too expensive.

As I always say, these kinds of discussions don’t yield any hard scientific data, but they do point to interesting questions that some consumers have when they are considering a purchase.