When it comes to gadget purchases, new data from Nielsen shows that men prefer tablets, while women prefer e-Readers.

The data comes as part of a quarterly survey of connected device users and found that smartphone usage is about equal across genders.

It’s still a bit early in the tablet life to assign a male symbol to the back of every tablet sold, but there are some reasons why men and women are choosing the gadgets they use.

Why Do Men Like Tablets While Ladies Love E-readers 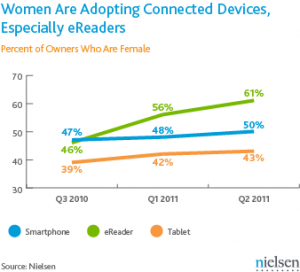 Reading – The biggest reason may be that women are bigger readers than men. Women read 9 books a year, compared to 5 books read by men. The literary love may be behind the larger proportion of women e-reader owners.

Size – Perhaps the second biggest reason that e-readers appeal to women is the size. Compared to tablets, which will just call the iPad, e-readers are thinner, lighter and smaller. This means that they can fit in a purse with ease and be held for longer periods of time.

Utility Knife – The tablet may appeal to men more, for the same reason many of us pick up a swiss army knife or always have duct tape handy — it can do more than one thing. It may not be the perfect tool for the job, depending on the exact situation, but it is better than a utility belt full of single use devices.

Power – We could also be witnessing the effect of marketing and gender preferences for power. Stereotypically men like powerful sports cars, which, if you look at tablets shows up in the marketing of faster processors and more powerful graphics. E-readers on the other hand, focus on selling a book-like experience.

What About the Nook Color?

In the middle of all of this is the Nook Color, an e-reader that wants to be a tablet. It would be interesting to know how Nielsen categorized this device, as well as to see the actual breakdown in use.

Based on my talks with readers, friends, family and average consumers, this isn’t too shocking. Most of the women I talked to about mother’s day gifts liked the appeal of an iPad, but weren’t a fan of the size or price. The kindle came up quickly as a second choice, but many came back to the Nook Color because of the size, price and mix of use.

What Next for Tablets and E-Readers?

We’re starting to see a variety of sizes in the tablet marketplace, on the Android side anyway. This could lead to some leveling of the gender differences as more people purchase tablets and e-readers. I expect that after this holiday season we will see another shift in gender and age ownership demographics.

Who knows, Apple may come out with a thin 8″ iPad with a retina display that fits perfectly in a purse or cargo pant pocket and steal yet another market. Or, Amazon could convert current e-reader owners into tablet toters with a small Android tablet.