Tapbots, best known for its popular Tweetbot app for iPhone and iPad, has a new app for Twitter competitor App.net called Netbot.

Unlike Twitter App.net isn’t free. App.net charges users $5 a month or $36 a year to use the service (original launch price was $50 per year). Because users pay for access there are no promoted accounts or posts on App.net. It’s like the early days of Twitter before it gained mainstream appeal and a business plan. 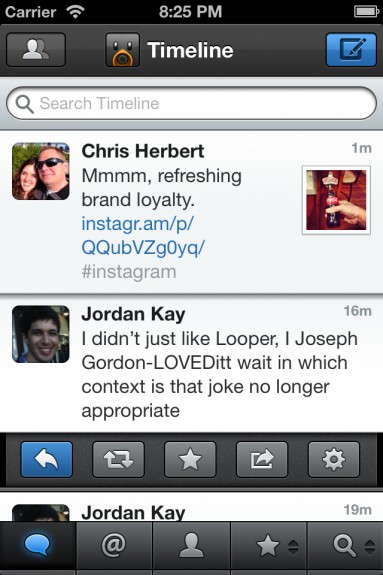 As an added bonus, because App.net isn’t restricted to the number of characters in an SMS like Twitter originally was users get 256 characters to write out their thoughts on the service.

Because App.net is so similar to Twitter, Netbot looks just like Tweetbot, but it has a grey logo instead of a blue one. Netbot lets users post their thoughts to App.net and cross-post them to Twitter so there’s no need to copy and past the same status into two apps.

Netbot also lets users search for their Twitter friends who are already on App.net, which is a great feature.

Everything else from the swipe gestures to the customizable tap bar on the iPhone version is the same as Tweetbot.

Netbot is available in the App Store now for the iPhone and iPad. Both apps costs $4.99, but users need to buy each separately.

The video below explains a bit more about the App.net service.