Imangi Studios, the developer behind the hugely popular game Temple Run announced a new milestone for its game today.

Today Imangi Studios announced that Temple Run has crossed the 100 million downloads mark just one year after it first came to the iPhone and iPad. Users downloaded the endless running game 68 million times on iOS and 32 million times on Android. The disparity between the two platforms is so large because it took a few months for Temple Run to come to Android. 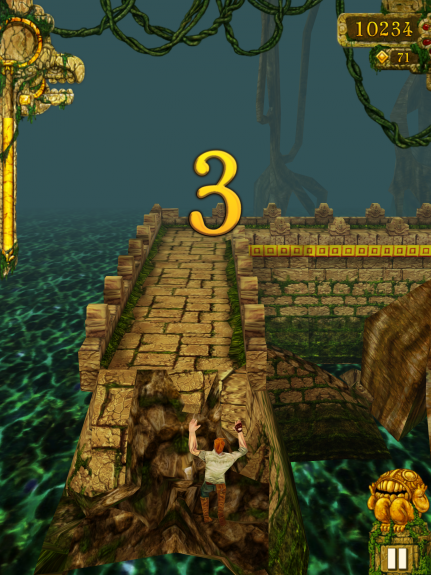 Since the game’s release in August 2011, players started over 10 billion sessions of Temple Run. Combined, those players played the game for more than 54,000 years.That’s a lot of wasted time.

Based on the download numbers Imangi Studios estimates that about 13 percent of the U.S. population has at least downloaded the game. That’s some impressive reach for a game that’s just now one ears old.

To celebrate the milestone Imangi Studios is bringing all of its previous games down to a price of free. None of the games have quite the reach and brand power of Temple Run, but when they’re free, there’s really nothing to lose by downloading and trying them out.

Imangi Studios recently partnered with Disney for Temple Run: Brave, though we don’t know if the studio has other Temple Run games in the pipeline. We do know, however, that between comic books, pajamas, arcade units, and other merchandise, we’ll soon see Temple Run in more places than just our mobile devices.