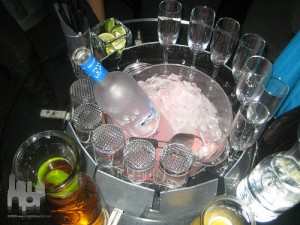 No One Likes Bottle Service Fees

Paying for a set quantity of something, say a bottle of Wine, and then being required to pay another fee to use it in a certain way, to drink it in the wine merchant’s tasting area, can be a bit annoying, but it’s a fact of life and you don’t see many people storming in with their own corkscrew to avoid a bottle service fee.

For some reason these same people feel entitled to use their smartphone data plan as a mobile hotspot without paying the carrier’s “bottle service” fee because they have already paid for the “wine” and it’s theirs to do what they want.

As much as I understand the reasoning behind the argument, and wish that carriers would offer a data plan that covers mobile and tethering, I have to agree with James Kendrick’s assessment that, “if your carrier asks you to pay for the right to tether (called mobile hotspot), and you manage to do so without enrolling in (and paying for) this plan, then you are stealing service from your carrier.”

No matter how you slice it or spin the argument, if you are tethering without the appropriate plan you are stealing from your carrier because you are using your data plan in a means not included in the price you paid.

Does this suck? Yes. Should carriers sell you a bucket of data that you can use as you please? I certainly think so, but the carriers don’t offer this type of plan yet.

If you disagree with the plans and terms your carrier offers, it doesn’t mean that you are entitled to tether for free simply because you have paid for some data and think it’s right. I wish that was the truth, but it’s not.

Yes, I have tethered without an appropriate plan, and I am not trying to say that I am better than someone who is tethering without paying, but I am saying that if you try to get around paying for bottle service too often, the wine merchant will start taking steps to prevent you from circumventing the service.

In the case of tethering without a data plan, we are already seeing carriers take steps to prevent rooting of phones through locked bootloaders which has been met with mixed success. The next step came from AT&T, when the company sent out letters telling tethering users to get on an appropriate plan. But this is just the beginning.

P3Droid, a respected Android ROM developer recently posted a state of the Droid address which calls out carriers and manufacturers, even Google, for conspiring to lock down the Android platform. In his post, P3Droid shares this interesting news,

1. The way that they were able to track rooted users is based on pushing updates to phones, and then tracking which meid’s did not take the update. There is more to it than this but that is the simple version.
2. More than one major carrier besides Verizon has implemented this program and that all carriers involved had begun tracking rooted phones. All carriers involved were more than pleased with the accuracy of the program.

If you attempt to get around this tracking, your phone could lose access data and voice! While I find these actions horrible, they are clearly driven by a desire to track users that are essentially stealing services through tethering without a data plan. Unfortunately, those of us who just want to be able to load the coolest ROMS and tools also suffer in terms of being tracked and in term of phone selection.

The Motorola Droid Bionic looks like an amazing phone with a 4.3″ qHD display and a dual core processor, but the fact the bootloader is locked means users will be relient on carriers for support and updates instead of the capable and quick development community which forms up around phones that don’t lock out the end user.

The only gray area is when phones have the ability to tether, but the carrier doesn’t support the option. In this case, it is difficult to blame the user for expanding the capability of their smartphone, but it was something that carrier did overlook while they attempted to figure out how to charge for tethering.

Now, like the first stores trying to sell songs to a generation of Napster users, the carriers need to convince people to pay for tethering. In this case, the best option would be to make the paid tethering services drop dead simple and more affordable.