The 1 Reason Why I Decided to Jailbreak My iPhone 5

The evasi0n jailbreak tool released early Monday morning, there’s been a lot of news about jailbreaking recent iOS hardware. There are arguments for and against jailbreaking, and with iOS 6. With iOS 6, the need for me to jailbreak has been mostly diminished as Apple had brought many of the features to the mobile platform that were only available through jailbreaking in the past. However, there is still one big reason why I decided ultimately to jailbreak my phone–the ability to download iTunes movies and TV shows on the go over 3G/4G without having to connect to a WiFi hotspot.

After jailbreaking, the Cydia app that I installed is called 3G Unrestrictor. That app allows me to override Apple’s limitations and lets me customize my phone to allow large app files to be downloaded, movies and TV shows to be downloaded over 3G/4G, and bypass any streaming restrictions where said restrictions apply to mobile broadband consumption. 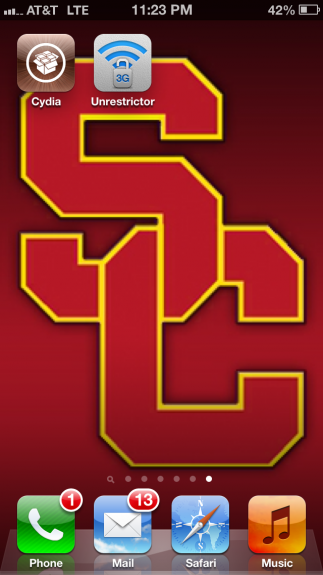 As a person who has cut the cable cord for a few years now, I mostly rely on Apple TV and Netflix to deliver my entertainment content at home through my Apple TV unit and my iTunes account, which gives me access to TV shows and movies. It’s simple and easy, and shows start playing right away with a stable and fast DSL or fiber connection.

On the go, however, things are a bit different. With a 3G/4G iPad, iPad mini, or iPhone, Apple limits video file downloads to 500 MB over a mobile broadband network. SD movies are usually around 1 GB and HD movies hover between 2-5 GB. This means that to download movies and TV shows, users would have to hunt for and connect to a WiFi hotspot.

This isn’t so bad when you’re at home or work where your WiFi connection is fast and reliable. At hotels, airports, and public places, WiFi speeds are often slow, and definitely much slower than my 4G LTE AT&T connection, which gives me speeds up to 15 Mbps. With a 3 GB movie file, my download time is roughly 25 minutes on AT&T; it would be hours on many of the cafe hotspots near me.

To be clear, I don’t download that many movies and my data plan currently is a tiered 5 GB plan. But allowing me the flexibility to download a movie over 4G LTE when I need or want to allows me the freedom not to plan what I want to watch on my next plane trip. I can be at the airport and connected to LTE and just download something on the spot without having to think about what I want to watch on the plane while I am packing for my trip at home.

Also, it allows me to not have to worry about interrupted downloads. My colleague Josh Smith had experienced an interrupted iTunes movie download while we were in Las Vegas for the Consumer Electronics Show. As the WiFi network cut out, Smith’s movie rental was in limbo and there was no way to resume the download. Apple’s solution was to wipe the iPad mini and restore from a backup or set the device up as a new device and attempt to re-download the movie.

Had Smith been able to download over 4G, he wouldn’t have had to undergo the trouble of restoring his iPad because of a botched network connection leading to a failed download.

While allowing large movie files to download over a mobile network can be dangerous as the average user may not know what their monthly data cap is and what GB or MB means, Apple can implement a pop-up warning to say that most users are subscribed to a 2 GB file and that the file they are downloading is a certain number of GB, which is close to or exceeding the average monthly data bucket.

Of note, Google doesn’t have Apple’s limitations with movies and TV shows downloaded through the Google Play Store. It does have a warning pop up dialogue box alerting users they are downloading over a wireless mobile broadband network and can incur data charges, but it freely allows users to stream or download the video file as they choose.

This would allow for users to be flexible with how they use their data plans–after all, I did pay $50 just on data every month so I can freely use it however I want, and that should apply to emails, web browsing, movie watching, YouTube surfing, Pandora streaming and whatever else I want.