If you were playing Doodle Jump on an iPhone 3GS a mere two years ago, you wouldn’t have likely imagined that the DS’ and PSP’s portable gaming dominance would soon be threatened by Apple’s smartphone OS. Yet threatened it was, and one of the games that helped to do this was Infinity Blade. Don’t let the fantasy setting and the added-on RPG elements fool you though. Infinity Blade‘s inspiration is from a game without a castle, sword or shield to speak of. Its predecessor’s only magic involved a teleporting Indian with a flashing jewel on his turban. Yes, Infinity Blade’s blueprint is straight out of the 1987 NES classic Mike Tyson’s Punch-Out!!.* 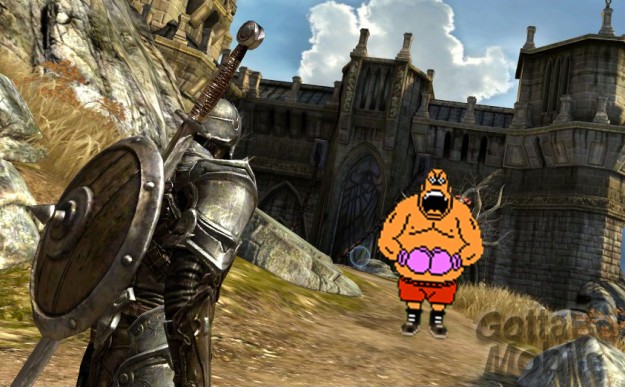 Infinity Blade can thank Punch-Out for the 8-bit Inspiration

It’s hard to imagine anyone who was a kid in the 80’s not immediately recognizing that Infinity Blade is essentially Punch-Out in Middle Earth. The core gameplay parallels are unmistakable:

That the popular iOS title borrowed heavily from the boxing classic is hardly a secret. The real wonder is in how ChAIR Entertainment and Epic Games may have seen the parallels between consoles over 20 years apart – and used the classic title’s broader formula to achieve similar results today.

While it was a dedicated gaming system, the Nintendo Entertainment System was very much the iDevice of its day. It exploded onto a new frontier and quickly made the Atari obsolete (downright Blackberry-ish, some might say). Development flourished and every child soon wanted one.

Though the NES’ graphics were limited, the genius of Punch-Out was in the way that it produced some of the most standout visuals of its day. It did this by simplifying what it had to do:

The developers of the classic game were able to create such visually impressive (for its time) characters because the game didn’t require its devs to do much else. Not having to design an entire strategy guide’s worth of worlds, enemies and puzzles opened the door for them to really wow us with the few elements that they did pour their resources into. There’s something to be said for putting all of your eggs in one basket – if you can make that one basket do something special.

Infinity Blade follows that simple formula (nearly) to a tee. iOS devices pack a lot of power, but they still can’t deliver a full current-gen console experience without losing something (see Gameloft). With a limited to-do list, however, they can.

Did Epic and ChAIR somehow know that the vine was ripe for this? Well, the NES was released in 1985 and Mike Tyson’s Punch-Out!! hit store shelves in 1987. The iPhone got the AppStore in 2008 and Infinity Blade arrived in 2010. Both entered two-year-old frontiers that were ready for the next big thing.

Of course it’s possible that Punch-Out was merely a model for the action in Infinity Blade and the rest was accidental. But whether it was intentional or not, the game’s makers used Punch-Out‘s overall blueprint to perfection: it’s an addictive game with striking visuals that deeper iOS games can’t possibly compete with (yet). Instead of painting a decent Sistine Chapel, they created a masterpiece on one single canvas.

* While Mike Tyson’s Punch-Out!! was preceded by coin-op versions and followed by console sequels, the NES version is the focus here due to its immediate impact and lasting popularity.