The Ideal Mobile OS for a Tablet

First, there is no so such thing as an ideal mobile OS. But humor me a bit here. Using three different mobile operating systems on Tablets gives me the opportunity to sample the best (and worst) of each. Using iOS, Windows RT 8.1 and Android 4.2 there are things to like with each. I’m fantasizing here that it would be great to combine the strengths of each Tablet OS and see what that cobbled together Frankenstein’s monster would mean for a Tablet. Set the hardware aside for the moment (tough to do I know) and let’s fantasize a bit. 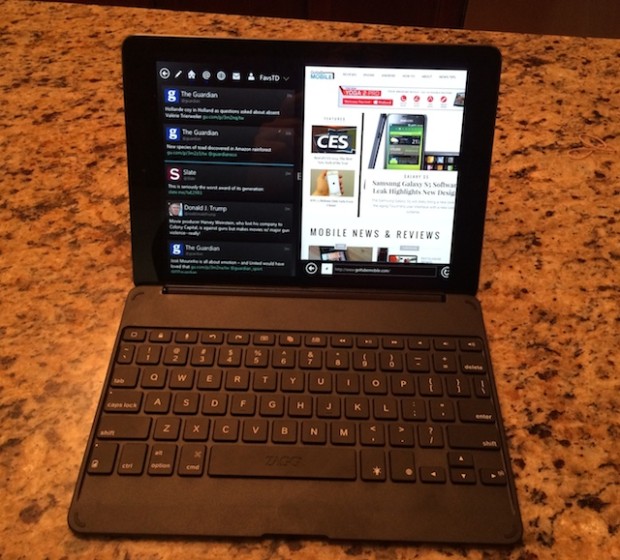 Here’s What I Would Take From Android 4.2

Google Now and Voice Control: Google Now and Google’s voice search are better than Siri. The predictive nature of Google Now is all about providing me information within the context of what I’m doing or where I’m going. Combine this with an always on listening mode (that is now on some Android devices) and this is a great feature.

Google’s Method of Sharing: Google lets developers plug into its APIs so you share just about any piece of information with another App. The other two competitors allow this on a limited basis.

Google Services and Apps: While I sometimes prefer other App or service solutions to Google’s, those that Google provides are good enough to use as daily drivers. The integration with Android is about as complete as you can get.

Here’s What I Would Take from Windows 8.1 RT

Snap and multi-tasking: Windows 8.1’s snap feature is more than about multi-tasking. It’s about the ease of having info work automatically in multiple windows. Click on a link and a snapped window opens with that info in some circumstances. The user doesn’t have to manually open a second window (you can of course), and you don’t have to keep switching back and forth between Apps. This seems to be the most intuitive use of having multiple windows open and multi-tasking that I’ve used so far.

Skydrive Integration: Each OS has its own syncing and cloud service. In my usage, Skydrive has been the most consistent and the most tightly integrated. I’m not a fan of Google Drive and its integration with Google+ when it comes to photos, scans, and PDFs. They are only an errant click away from begin shared inadvertently.

Easy and reliable access to SD storage: Microsoft makes it easy to store and retrieve data on a SD card installed in your system.

Lock Screen Slide Show: It may be a minor thing, but I like that on Windows 8.1 I can see a slideshow of photos on the lock screen.

Touch Integration: iOS on mobile devices still has the best and most consistent Touch UI of the three.

Touch ID: This is a great feature when it works well. I’d like it on a Tablet.

Camera Integration: Though I haven’t used some of the higher end Windows Phones, the camera integration on iOS devices impresses me the most of what I have used from a UI experience.

Do Not Disturb: I prefer how this feature works on iOS than on the other systems.

Take all of the above and put them in the form factor of an iPad Air and I think we’d be on to something. Now, below are some things that I would jettison from each of these three operating systems.

Here’s What I Would Not Take from Android

OS updates: Both Windows 8.1 and iOS 7 have a far better strategy for updates than anything Google offers. It’s the lasting (and ongoing apparently) shame of Android that this hasn’t been fixed.

Settings: While I appreciate the number of settings one can tweak on any Android device, finding a particular setting requires a bit of hunting. While there is a search function in settings in some versions of Android, I think we might have gone overboard when we need a search function to find and adjust a setting.

Here’s What I Would Not Take from Windows 8.1 RT

Desktop: Let’s move on and get rid of this.

Sandboxing: Apple doesn’t like Apps to talk to each other. This is ostensibly to keep things running smoothly. The difficulty is that you can’t easily share info from one App to another. Given that iOS 7.0.4 doesn’t run smoothly at the moment (too many Spring Board crashes) there’s no reason this needs to continue.

iCloud: Forget about it. Apple apparently has.

Now, again this is just fantasizing and certainly I’ve not discussed many features that probably should be thought of in cobbling together an ideal mobile OS for a Tablet. These are the things in the user interface of each that I come into contact with each day that I would like to see in a Tablet OS.