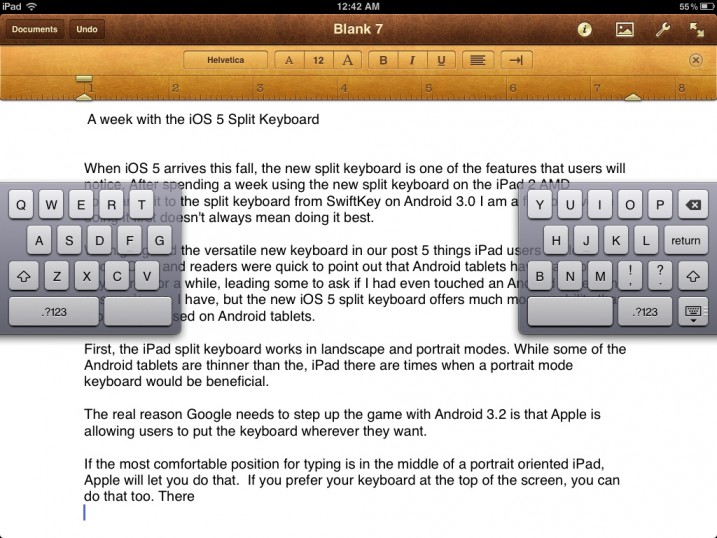 The new iPad split keyboard arrives this fall with iOS 5.

We highlighted the versatile new keyboard in our post 5 things iPad users will love about iOS 5 and readers were quick to point out that Android tablets have had split keyboards for a while, leading some to ask if I had even touched an Android tablet. The answer is yes, I have, but the new iOS 5 split keyboard offers much more usability than those I have used on Android tablets. 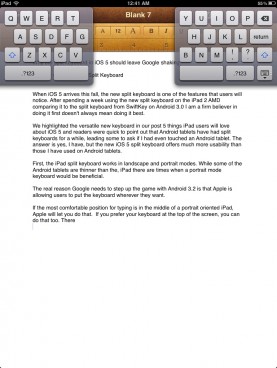 The iPad split keyboard in iOS 5 can be moved to wherever you need it.

First, the iPad split keyboard works in landscape and portrait modes. While some of the Android tablets are thinner than the, iPad there are times when a portrait mode keyboard would be beneficial.

The real reason Google needs to step up the game with Android 3.2 is that Apple is allowing users to put the keyboard wherever they want.

If the most comfortable position for typing is in the middle of a portrait oriented iPad, Apple will let you do that. If you prefer your keyboard at the top of the screen, you can do that too. Surprisingly, Apple is giving iPad users a lot of choice when it comes to the keyboard, and that translates into. Better user experience.

Take for example this post, written in Pages. With a traditional, stuck to the bottom keyboard, half the display is covered. With a switch to the split keyboard, I can float it above the previously written words to see more of the page and focus on what I am currently working on without the need for as much scrolling. This may seem minor, but after you use the new split keyboard, you’ll know what I’m talking about.

The ability to move the keyboard lets me type longer on the iPad and faster than I would be able to on the docked keyboard, unless I had a case and a flat solid surface. While there are numerous iPad cases designed to deliver a typing angle, Android tablets still focus on the in hand typing experience, which suffers with a permanently docked keyboard.

Call me a fanboy, but  the truth is I hope Google appropriates the split keyboard in the same way Apple knocked off Android notifications. 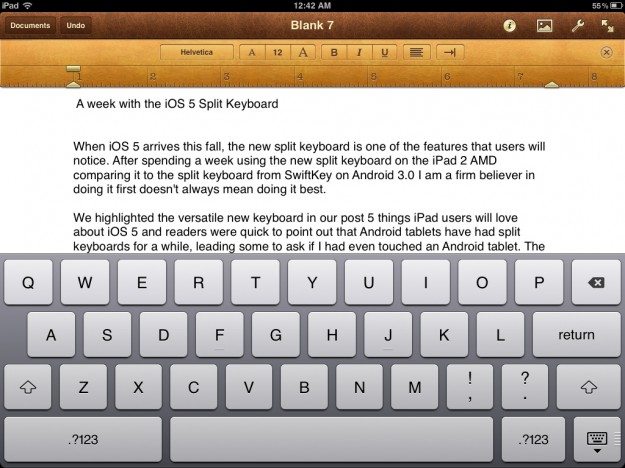 The normal iPad keyboard covers half the screen.