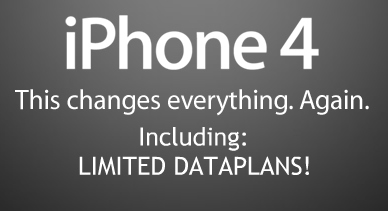 As a Verizon Wireless subscriber for over five years, I’ve had essentially no problems with their wireless service. My experience with customer service, on the other hand, has had its share of bad moments, but I’m happy overall. I would consider myself a satisfied customer except for one thing. I wanted the iPhone. Like many other Verizon and dissatisfied AT&T customers, I was holding my breath in the hopes that Steve Jobs would be announcing something that I would actually consider to be magical, a Verizon iPhone. Unfortunately, that announcement never came and Verizon users are left yet again without the Apple option.

This is where most people say, “Why don’t you just switch to AT&T if you want the iPhone so bad?” Well, that sure sounds easy, but it simply isn’t an option. The biggest reason I stay with Verizon is their excellent service in my region and the fact that nearly all of my family members are also Verizon Wireless subscribers. The lack of Verizon-to-Verizon if I were to switch to AT&T would send my talk minutes through the roof and certainly require that I upgrade to an even more expensive plan. No matter how badly I want an iPhone, it just can’t happen.

Ben of Notebooks.com has done an excellent job summarizing why Verizon doesn’t offer the iPhone on its network. It basically comes down to two limitations. The iPhone’s hardware isn’t compatible with Verizon’s wireless network, and AT&T maintains contract exclusivity. No one is sure when AT&T will lose exclusivity, but it’s safe to assume that there won’t be a Verizon iPhone any time in the immediate future.

Another reason I won’t be switching to AT&T for the new iPhone is due to the explosion of the Android OS. I was somewhat pessimistic about how successful Android would become, but it’s clear that Android is developing a strong following, has great features, and thousands of great apps in the Android Market. Yeah, the iPhone 4 looks cool, but it doesn’t really offer anything different from the top-end Android smartphones. The lack of an iPhone on Verizon’s network isn’t really a big deal.

The biggest reason I will not be switching to AT&T for the new iPhone 4 is alarming and should also concern you. I’ve been reading a lot of tech pundits as they share their opinions on the issue of limited smartphone data plans. Many articles proclaim that the revised AT&T plans will actually save the majority of folks money. New York Times writer, David Pogue, says by way of twitter, “‘BOO!’, right? But seems like 98% of us will SAVE money. I sure will.“While this may be true in the short term, people are missing the point that two major features of the new iPhone 4 are the data intensive Netflix streaming app, and the FaceTime video conferencing app. Granted, FaceTime is currently only available via Wi-Fi, but it’s only a matter of time before the Skype-like feature is provided via cellular network.

Unlike Mr. Pogue, I don’t believe it is far-fetched to consider how this new precedent, capped data plans, will impact our mobile futures. One can only expect data to become the dominate player on our smartphones, trumping text messaging and voice communication. Future wireless subscribers will demand and require always-on, data-intensive smartphones. Once customers are forced to accept limited data as a reality, you can be assured there will never again be a buffet option.

To be completely honest, I doubt that I would go over 2GB a month with my own smartphone plan. The issue at hand is a matter of principle, not whether I will save $360 per year with a limited plan. Thirty dollars a month is an outrageous price to pay per smartphone for data regardless of whether it is limited or not. And yes, Verizon may promptly follow suit, but if they force me to accept a limited plan, I’ll bite the bullet and jump to a carrier that has no limit. The moral of the story can be summed up with these two statements: 1) No phone is worth all the termination fees and hassle to switch networks, and 2) You can market limited data plans to be beneficial for consumers, but it’s simply another way to keep the network less cluttered and money in the pockets of AT&T. What the new iPhone really brings to consumers is the death of unlimited data.

You were a champion for the little guy with your “Take Back the Beep” campaign, but where are you now, Mr. Pogue? Limited data plans are just the beginning. Sounds like we need a “Take Back the Data” campaign. Is anyone else concerned about the new limited data precedent?

Xavier Lanier has a great FAQ at Notebooks.com that will help determine if the iPhone 4 is right for you.