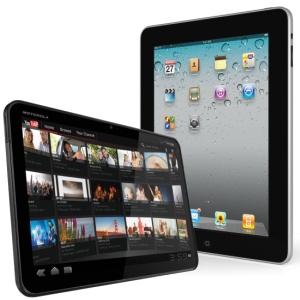 Last week’s dueling tablet news brought to mind an old Tablet PC argument. On one side, there’s The Daily, the digital newspaper designed for the iPad which retains the vertical orientation of print. On the other was Android 3.0 Honeycomb which demonstrated a distinct horizontal orientation. Makes me wonder how the old “portrait or landscape” question will affect the new tablet competition.

For as long as I’ve been using a Tablet PC, there has been debate over when and how to use a slate tablet in portrait or landscape mode. Usually it’s a matter of taste, but it also depends on the type of work being done or content being viewed. With the new crop of slates, however, hardware and software are making more of that decision for us.

While Apple plays up the notion that any side is up when it comes to the iPad, the reality is the side with the home button and docking port is clearly the bottom. The rest of the buttons are built around that, giving the iPad a distinct portrait-based design. Operationally, it’s more of a “hold in one hand, control with the other” device.

Throughout the Android 3.0 event, the imagery of the OS was almost entirely landscape oriented. There appears to be no requirement in the software for that. Instead, it seemed to be guided primarily by the predominant use of widescreen displays on Android tablets. Widescreen is better for watching video than a 4:3 ratio display, such as on the iPad, but it also makes landscape the favored orientation. Hardware makers recognize this and place ports, cameras, etc., accordingly. That combined with the typically smaller size of these tablets compared to the iPad make them better for holding with two hands and operating with thumbs.

Thus, while the iPad and any Android tablet can be used in either orientation, there is a preference on each side. In my experience, a 4:3 aspect display like the iPad’s works better for alternating between orientations. While a widescreen can work better in portrait mode in some cases, such as reading long web pages, it usually works better in landscape. Whichever one holds the advantage depends on a user’s personal taste and usage. As stronger iPad competitors come to market, I think the “portrait vs. landscape” decision will become a more important factor in purchases.