Once the rumors started flowing that Apple was going to replace its 30pin dock connector with something smaller we started seeing grumbling. Now that the iPhone 5 is official and we know that the new smaller connector, dubbed the Lightning Connector, is real, this move looks to have struck a nerve with parts of the business sector in addition to consumers. This Wall St. Journal article points up that some hotels and gyms, along with automakers might be particularly concerned.

That only makes sense. In the case of the hotelier mentioned he had invested a substantial amount placing 600 clock radios that include iPhone docks in his hotel rooms. I’m sure he’s not alone. The iPhone (and other iOS devices) has truly been a phenomenon and I can recall personally seeing at least two hotels that are in the same boat (or is that dock?) Apparently gym owners have been doing some investing in equipment with iPhone connectors as well. And I’m sure there are other businesses that have done the same thing. 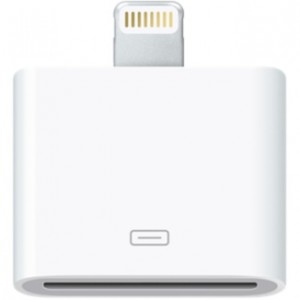 So, what are the options? Invest in a bunch of the new $29 adapters? Yeah, like those won’t just walk out the door like robes and towels. Reinvest in all new equipment? Those kind of investments don’t take place each and every year. So, it looks like owner’s who have bought into the Apple world will have some tough decisions to make.

As the Journal article points out though, this quandary also creates an opportunity for other businesses that specialize in making or selling accessories. The accessory economy for iOS devices always seems to be humming. And I’m guessing that most accessory makers are feeling pretty safe about betting that Apple won’t be making connector changes in the next few business cycles. (How long did we have the 30-pin connector?) But this shift will also probably mean even more accessories that use Bluetooth 4.0. That avoids using connectors altogether, and we’ve already seen quite a bit about those coming accessories since the advent of Bluetooth 4.0. I’m all for that. Anything that doesn’t require a cable is OK in my book. Also keep in mind that over the next upgrade cycles we’ll most likely be seeing more devices (iPad, iPad Mini) with a lightning connector in them as well. There’s even been some speculation that Apple may already be retooling the current iPad (or is that the current new iPad?) to with the lightning connector going forward.

For consumers, I’m sure we’ll see a slew of things rushed to market before the Christmas shopping season hits hard. But the real bounty of new accessories will probably come next year. For businesses it will be interesting to see how long before we start seeing a changeover to the new spec(s).