The Samsung Gear VR Is TV For Your Galaxy Note 4

How to Free Up Space on Your Samsung Galaxy Phone

Never content with sitting on the sidelines and letting others explore new areas of technology alone, today, Samsung Mobile moved even further way from its core smartphone productivity roots. Shortly after announcing the Samsung Galaxy Note 4, the company revealed the Samsung Gear VR, a new headset that will put users right in their games.

Revealed at the Samsung Unpacked Event earlier this morning, the Gear VR is exactly the kind of headsets we’d expect from Samsung. That is to say, whereas competitors are struggling to make low-cost VR headsets that include screens and sensors – like Sony’s Project Morpheus – the Samsung Gear VR is first a Galaxy Note 4 accessory. 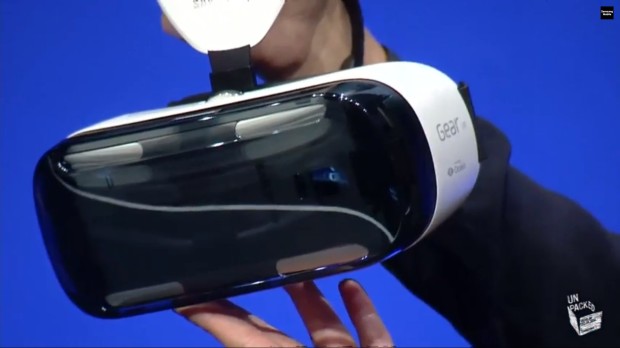 The Gear VR doesn’t have a screen or speakers of its own. It can’t be used independently of a Samsung handset. Instead, users are required to drop their Galaxy Note 4 into the Gear VR. The Gear VR connects to it, using its screen and sensors to make all the virtual reality stuff happen. According to a report from Engadget, Samsung actually partnered with the now Facebook owned Oculus Rift team to create the Gear VR. Samsung created the hardware while Oculus worked on the software.

The Gear VR, which doesn’t yet have a price, consists mainly of two parts. First, there’s the actual thing holding the Galaxy Note 4 in front of the user’s face. The Gear VR has a little slot that just accepts the Galaxy Note 4. A white plastic housing surrounding where the Galaxy Note 4 fits ensures that the display is always far enough away from user’s eyes. Users can adjust the focus of the Gear VR with little rotary dial on the top – just like they would a pair of binoculars.

The second major part of the Gear VR is a giant headband that goes over the user’s head. This head contraption simply secures the Gear VR in place. It’s adjustable so that users can get just the right fit for them, but it’s not exactly hard to spot. In fact, it’s huge, kind of unsightly and has a Samsung logo stamped across it. Both parts of the Gear VR have alternating black and white parts to match the Galaxy Note 4.

Instead of connecting over Bluetooth, the Gear VR connects to the Galax Note 4 using a microUSB dock inside of it. That does mean that users are stuck plugging in and unplugging the device. That also means users should have to think less about checking the device’s battery.

When gaming the Gear VR can uses a gyrometer and accelerometer to track head movements from side to side. Moving forward or backward with the Gear VR on won’t reflect in games. Users navigate with a touchpad that sits off to the side on the Gear VR itself. A back button and volumes reside there too.

Right now, functionality seems to be lacking. Engadget’s report highlights a 3D video experience that takes some getting used to. Mainly, it focuses on a Cirque du Soleil performance that let users look around the stage. The Gear VR also has a pass-through system that lets users see through to the real world if they need to. When users need to leave a game and get something done, they can without taking off the Gear VR.

So far, Samsung is only confirming that it has plans to launch the Gear VR sometime this year – presumably around the same time it makes the Galaxy Note 5 available to users in different countries. Like other Galaxy Note 4 accessories, users will be able to purchase the device online. It’s not to far fetched to assume that it’ll be available in the accessory areas at a few carrier stores too. Samsung has yet to price the Samsung Gear VR.