The ThinkPad 10 is a Windows 8 tablet that is thin, light and ready for productivity with an active stylus for note taking and a ThinkPad Keyboard that doubles as a case. When you are at a desk you can dock it to a ThinkPad Dock to use it with a large monitor and full size keyboard and mouse.

Users looking for a business ready tablet need to try the ThinkPad 10, which runs Windows 8.1 with full access to the desktop and enterprise apps. If you need to run Windows programs on a small tablet that can double as a small notebook this is an excellent option.

Instead of looking for a way to run your business on an iPad or Android tablet, the ThinkPad 10 is ready for business users with the same features found on Windows 8 notebooks and desktops in the convenience of a tablet and a notebook in one. 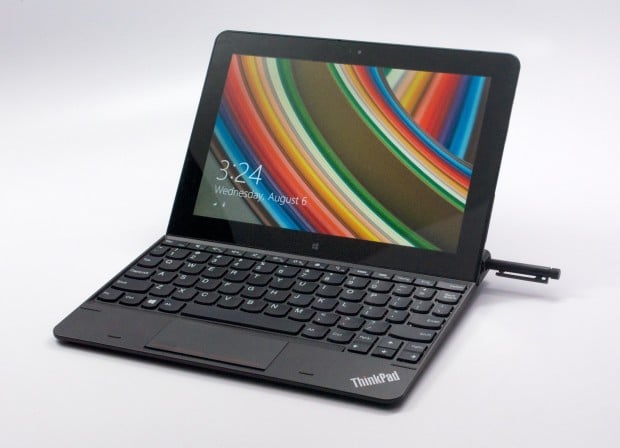 Here’s why the ThinkPad 10 is a great business tablet.

After using the ThinkPad 10 for several months, it shows clear advantages of the iPad Air I normally carry, delivering more productivity when it is the only device I want to take with me.

At $599 the ThinkPad 10 tablet is less than an iPad Air with the same amount of storage, and for business users the stylus and Windows 8.1 are definite upsides to this affordable Windows tablet. It’s also $200 cheaper than the Surface Pro 3, although with a smaller screen and less power.

Lenovo includes a 10.1-inch touch screen display with a 1920 x 1200 resolution that is a nice fit for a screen this size. When you need a bigger display you can connect with a HDMI cable or the ThinkPad dock and grab a keyboard and mouse in your office or on the road. The touch screen is very responsive and delivered a very nice touch experience inside Windows 8.1.

The ThinkPad 10 weighs 1.3 pounds and is small enough to grab and go just like other 10-inch tablets on the market.

Businesses can choose between 64GB and 128GB of internal storage and 2GB or 4GB or RAM with an Intel Atom Quad Core Processor that is powerful enough to run multiple apps at once during my ThinkPad 10 review period. Power users and media professionals will likely need something more substantial.

Users can add more storage with a MicroSD card slot and a full size USB port on the edge allows connection of an external hard drive or Thumb drive as well as other USB accessories.

Decently powerful stereo speakers sit on the left and right back edges. These sound good in tablet mode, and shine when used with the ThinkPad 10 keyboard case that directs the sound towards the user.

Front and rear cameras can deliver 1080P video for video conference use and the rear facing camera is an 8MP camera with a flash. Lenovo sells a QuickShot cover that is a folio style cover to protect the screen with a small fold back corner to activate the camera without taking the case off.  There is even an optional 3G/4G model for users that need connectivity.

All of this is wrapped inside a black aluminum back and glossy front bezel. The tablet is easy to grip while in tablet mode and the aluminum is a welcome design choice.

The ThinkPad 10 is a very small device that is capable of delivering mobile and office productivity better than an iPad Air, but not on par with a full size notebook.

A 10.1-inch screen is large enough and bright enough to use in many settings, but I miss the backlit keys on many notebooks, and the ThinkPad 10 keyboard case ($119) is a little small for full-time use. Some added keys are crammed in and the PgUp and PgDn keys are easy to accidentally press while using the arrow keys. 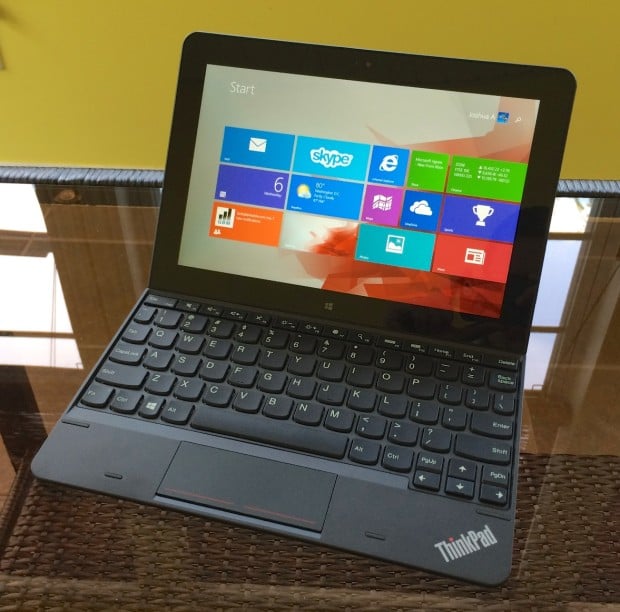 The ThinkPad 10 and keyboard case are a productive pair.

If you plan to use this primarily as a tablet that can still deliver fast typing with the keyboard you’re set. The small touchpad on the ThinkPad 10 keyboard case is too short and the right-click zone too small for me, so I use the touch screen more than the touchpad.

There is no adjustable angle on the ThinkPad 10 Keyboard case, but the angle is usable on a desk or on a lap. The keyboard case adds 1.1 pounds to this device pushing a full package up to 2.4 pounds and you’ll also end up with a device that is about an inch thick when using the keyboard as a case.

When I docked the ThinkPad 10 in my office connected to a 27-inch monitor and paired to a Bluetooth keyboard and mouse I felt right at home as if I was using a full Windows 8 setup instead of a $600 tablet.

The ability to run two browser windows side-by-side is essential for many of my tasks, as I am comparing items or writing and communicating with team members at the same time. I can do this easily on the ThinkPad 10 tablet, but not on my iPad Air. 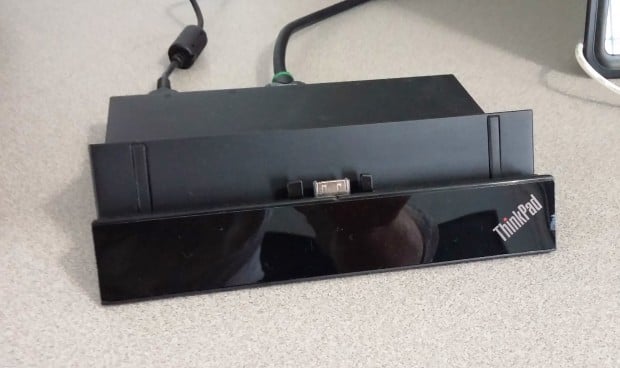 Use the ThinkPad 10 dock to connect to a monitor, hard drives and accessories in your office.

In my previous job as a database administrator using software that only works on Windows, the Thinkpad 10 would have been an amazing device to complement my powerful desktop, and at $599 it using it as a companion device is not out of the question.

I also found myself relying on the active stylus for not taking on the ThinkPad 10 in tablet mode. It is an easy way to capture ideas that come up as we plan out the month and  brainstorm ideas. The active stylus lets me rest a hand on the screen without messing up my note taking, like on an iPad. There is a small spot to store the stylus in the keyboard. 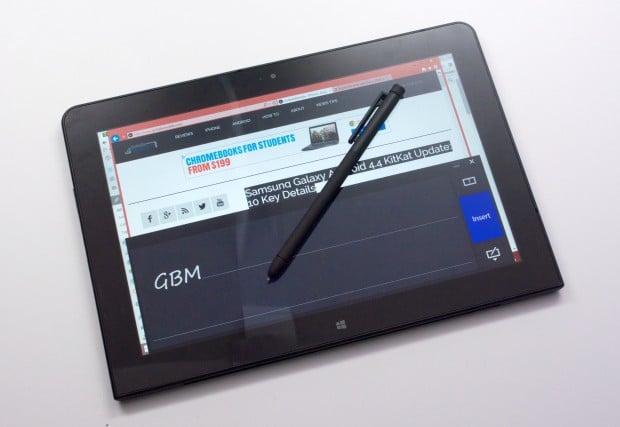 The stylus is a handy way to take notes and to use the handwriting keyboard option.

This is not a tablet you’ll want to use for processor intensive tasks, but for most office workers and executives it packs enough power to be a useful tool. In your downtime don’t plan on playing any full-scale PC games, but tablet style games in the Windows App Store run well. You can also stream video, including HD and 4k, without stuttering.

My only real complaint about the ThinkPad 10 battery life is that one several occasions while using the ThinkPad 10 keyboard case the battery was mysteriously dead after little use, which may be from the screen turning on when the tablet slipped of the keyboard in my bag.

Outside of these occasions, the ThinkPad 10 battery life is quite good. Lenovo rates it at 10 hours, but I normally got about six to nine hours of real world use with the brightness up and music playing. Depending on what you need to do and how bright the screen is you may end up a little short of all day use. The ThinkPad 10 keyboard does not include a backup battery to add more storage.

The ThinkPad 10 charger is small and easy to carry, but it’s not something you’ll need with you every day. 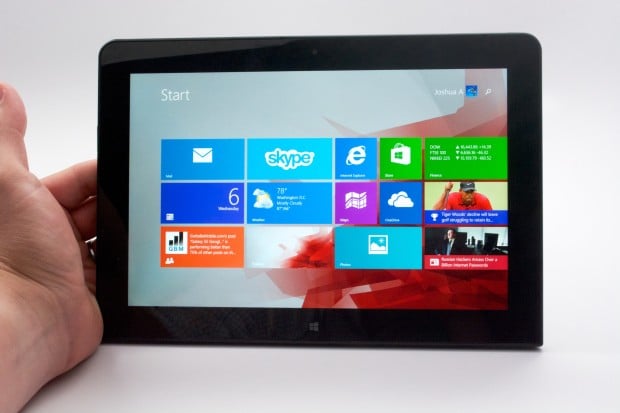 The ThinkPad 10 is a business friendly Windows 8 tablet that delivers productivity with optional accessories.

The ThinkPad 10 is a very capable business tablet that offers optional accessories that transform it from a Windows 8 tablet to an on the go productivity machine that can also work in an office with a larger display, more storage and full mouse and keyboard.

For business users that want a portable machine capable of doing almost everything their full Windows 8 machine does in the office, or who want to use this as their primary device with a dock and a keyboard case this certainly delivers easy use and productivity at an attractive price.