Lenovo introduced the ThinkPad T431s, a slim 14″ business Ultrabook. The ThinkPad T431s is the cleanest T-Series ThinkPad we’ve seen to date thanks to a healthy dose of user-friendly design touches.

Lenovo put a lot of effort into evaluating how people actually use its notebooks in the real world. Designers put prototypes into the hands of users and study groups in nine countries before settling on the final design. While many of Lenovo’s customers buy ThinkPads for their reliability and durability, it’s nice to see the company working on the finer points of design. 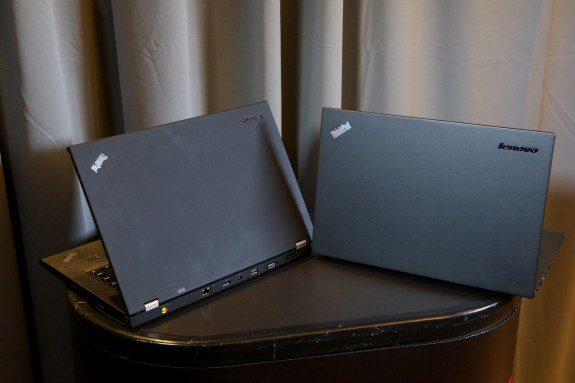 Lenovo even changed its shade of black and finally flipped its logos so they’re not upside down when the laptop’s in use.

The full-size 14″T-series ThinkPad is Lenovo’s bread and butter in the corporate world, with some of the largest companies in the world offering them up to employees by default. But the full-size T-Series isn’t as mobile as some would like. Lenovo began selling slimmed-down T-Series ThinkPads a few years ago, but they didn’t go far enough. The new T431s takes thinness and mobility to the next level, weighing in at just 3.6 pounds.

The ThinkPad T431s is significantly thinner than the T430s. The new model measures just 21mm thick, which is 5mm less than the older one. Lenovo got rid of the optical drive to help slim things down and save weight, but managed to pack all the ports from the older model into the T431s. Ethernet, VGA, DisplayPort, USB 3.0, Smart Card and Audio ports line the left side of the notebook. 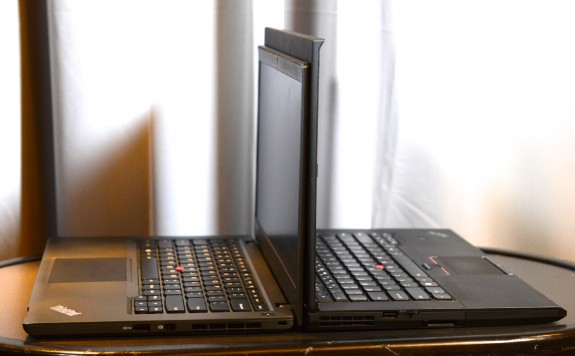 The ThinkPad T431s has a new hinge design that allows it to lay completely flat. The dropped hinge also reduces the overall screen height, which means it will be easier to use on airplane tray tables. The T431 is latch-less,which means it doesn’t have hooks protruding above the display like we’ve seen on older T-series notebooks. 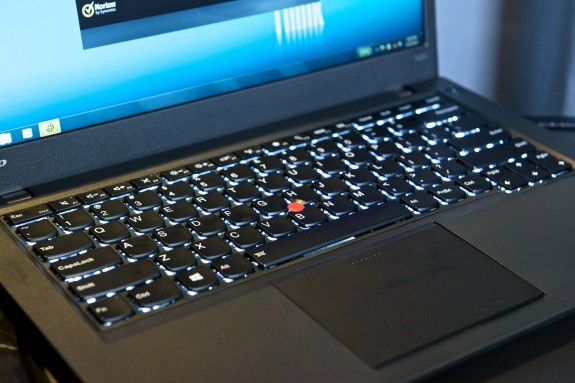 ThinkPads have the best keyboards in the notebook industry and the T431 is no exception. The backlit keyboard feels great and looks great thanks to the backlighting and simpler layout. Lenovo got rid of a cluster of the cluster of buttons found above the function keys that included volume and ThinkVantage buttons. Volume, screen brightness and other settings are now the F-key’s primary functions.

The T431s features a silky-smooth glass trackpad. The trackpad is much larger than the ones found on other T-series ThinkPads and forgoes the four physical buttons. The trackpad is recognizes Windows 8 gestures and is smart enough to know when a user is using the TrackPoint to navigate.

As with all T-Series notebooks, the ThinkPad T431s is highly configurable. The ThinkPad T431s can be ordered with up to a 1TB hard drive or 256GB SSD. The base model will ship with 2.7GHz Intel Core i5 processor and 4GB of RAM, which is soldered onto the motherboard. Those requiring more power can opt for a 3.3 GHz Intel Core i7 processor and up to 12GB of RAM. Lenovo is offering an optional 24GB mSATA SSD to compliment larger the traditional hard drives.

The ThinkPad T431 works with T-Series accessories, including power adapters and docking stations. It will start shipping in April for as low as $949.