The ThinkPad Tablet 2 is a lightweight, business-ready Windows 8 tablet that supports pen input and can pair up with a ThinkPad keyboard for mobile productivity.

The think and light Lenovo ThinkPad Tablet 2 offers long battery life thanks to an Atom processor. While it can run legacy applications on the Windows 8 desktop mode in Windows 8 Pro, this tablet isn’t going to deliver the power needed to run very resource intense apps.

With that in mind, this 10-inch Windows 8 tablet is priced and designed as a companion device that a business user can take to meetings, on trips and to use while on the go. Starting at $611, the ThinkPad Tablet 2 is a capable business tablet, but users will want to keep a laptop or desktop in the office for longer work sessions. 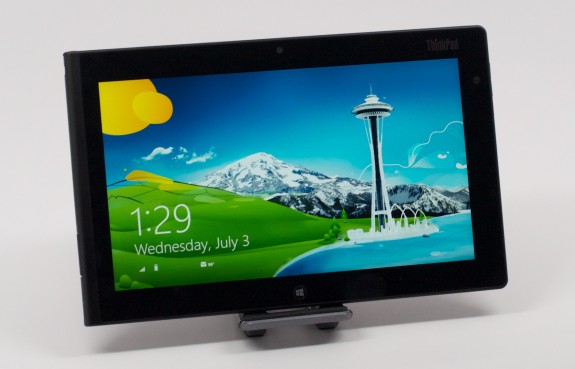 The ThinkPad Tablet 2 is a slim, light mobile productivity tablet with Windows 8.

The ThinkPad Tablet 2 is a thin and light tablet that measures .34-inch thick and weighs in at 1.29 pounds with the Pen. The tablet is features large bezels on all four edges that make it easy to hold the device without touching the screen and accidentally tapping on an icon or app. 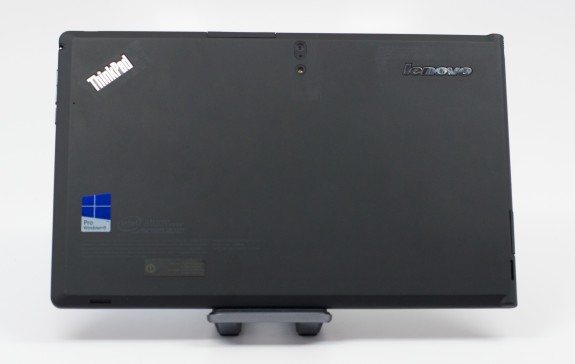 The ThinkPad Tablet 2 features a soft matte black back.

Unlike the iPad, the ThinkPad Tablet 2 has a soft matte black back, which holds up better than anodized aluminum over time. The ThinkPad Tablet 2 also includes a silo to store the pen. Not every Windows 8 tablet that supports pen input does, so it’s worth pointing out.

The tablet charges with a standard Micro USB port, which makes keeping the tablet or the optional keyboard charged easy. There is also a full size USB port to plug-in a thumb drive or external storage and a Mini-HDMI connector to link up to a projector or HDTV. A small port allows for the connection to a dock, but it is not used with the optional keyboard.

The ThinkPad Tablet 2 charges by Micro USB and includes a full size USB port for connecting a thumb drive.

Lenovo included the ThinkPad Tablet 2 keyboard with our review unit, but it is an optional accessory. The keyboard includes a pointer, but no touchpad for mousing. This pointer uses a small sensor, so users need to slide over it to mouse, rather than hold a nub forward or to the side. Three mouse buttons sit below the keyboard. In the end it’s easier to touch the screen.  Overall the keyboard performs well, but it’s not the best Lenovo ThinkPad keyboard typing experience we’ve had, and while accurate it isn’t going to go head-to-head with the ThinkPad Carbon X1 or another high-end business notebook from Lenovo. 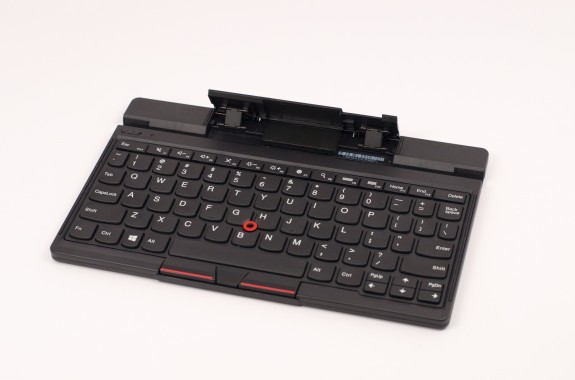 The ThinkPad Tablet 2 keyboard is good, but isn’t as nice as every ThinkPad keyboard.

The ThinkPad Tablet 2 and keyboard do not attach in a traditional sense, rather users must set the tablet into the dock where a small magnet holds it in place on a lap or on a table. This magnet is not strong enough to keep the keyboard attached if the user picks up the tablet. Additionally, the keyboard does not stay attached when closed for carrying, so Lenovo offers cases to simplify travel. As a result, the keyboard doesn’t feel like a complete part of the experience.

The ThinkPad Tablet 2 features a 10.1-inch display with a 1366 x 768 resolution, which is fairly common for laptops. While it is lower than the iPad Retina Display it delivers a good viewing experience. The display is large enough to use for mobile productivity, and is bright enough to use outdoors. The display is not matte, so visibility in sunlight in’t perfect, but it is possible for limited outdoor work. A light sensor will automatically adjust the display brightness to optimal levels. 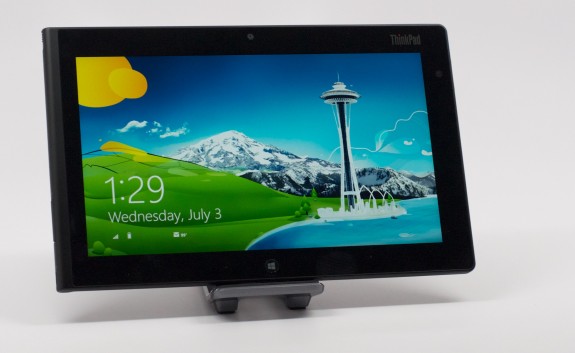 The ThinkPad Tablet 2 display is great, and bright enough to use outdoors in a pinch.

The display features wide viewing angles, so even though it is a small display it is possible to show it to a co-worker to share a slide or get input. The tablet works in landscape and portrait mode, but thanks to the widescreen aspect ratio it is better suited for landscape. 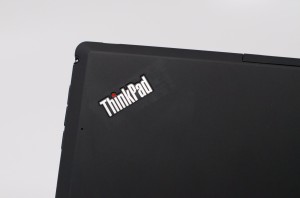 The Intel Atom processor isn’t going to win any awards for performance when it comes to apps, but it is more than enough to keep the Windows 8 interface snappy, including quick jumps between the Modern user interface and desktop mode.

One area users may run into some limitations on performance are when using multiple tabs in a browser or when multi-tasking on Windows 8, both of which can task the ThinkPad Tablet 2’s processor. There may be some slow downs in these scenarios, but overall performance for basic computing activities will not be a problem.

Users should be cautious of planning to use this to run resource-intensive Windows applications, but for the executive or average office worker performance shouldn’t be an issue.

The ThinkPad Tablet 2 only offers 64GB of on board storage, and users can add a MicroSD card for additional storage (up to 64GB additional).

The ThinkPad Tablet 2 really shines when it comes to battery life. With brightness at 40% and web browsing over WiFi the battery lasts at least 10 hours, offering a full day of real world use. This includes time using the Bluetooth keyboard to write in a web browser.

Playing video locally or streaming it will cut battery life down to six to eight hours, but that’s still an impressive feat for a business tablet. Users shouldn’t worry about getting through a full day of heavy use, or even a weekend trip with average use. 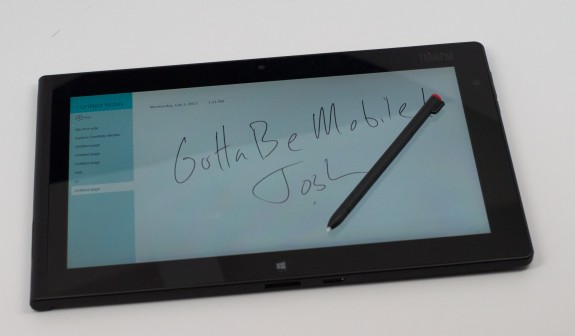 Users will enjoy taking notes on the ThinkPad Tablet 2.

Windows 8 supports inking in a variety of areas and the digitizer in the ThinkPad Tablet 2 brings this to users with a built-in pen. The pen is a key part of interacting with apps in the desktop mode, where user interfaces include buttons and touch points too small for the finger. The pen includes a small button that acts as a right-click.

When it comes to inking, there is a journal app in the Windows Desktop mode and Microsoft OneNote is on board with full inking support. The ThinkPad Tablet 2 screen is easy to ink on thanks to the slippery nature of the display, which makes it easy to move the pen tip around. Microsoft Office also lets users ink and convert to text from inside Word. 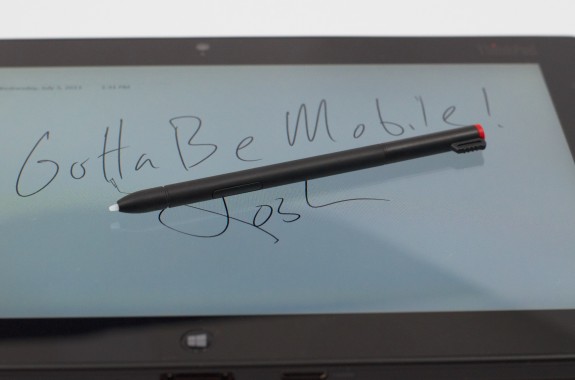 Overall the ThinkPad Tablet 2 delivers a better note taking experience than the iPad and most Android tablets because the technology lets users rest their hand on the display while taking notes, for a more realistic writing experience.

The ThinkPad Tablet 2 features two cameras that perform well. The rear-facing 8MP camera takes decent photos, though it is much better suited for capturing a receipt, business handout or notes on a whiteboard than photos of pet or a kid. The rear camera has a flash, but a 10-inch tablet is not a point and shoot, so don’t expect photos that look better than one taken on your phone or a dedicated camera. 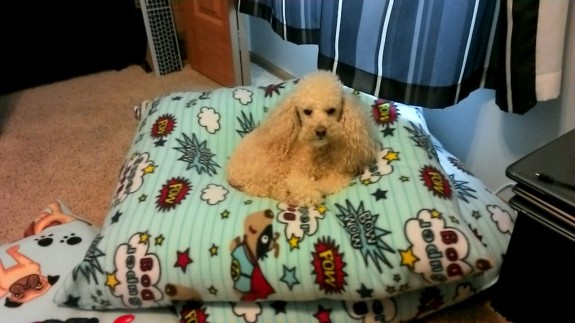 The front-facing 2MP camera is best suited for video chat, and delivers a good-looking experience to the person on the other end of the video call in average to good lighting. It’s not going to win any awards for low light performance, but it will do ok in a coffee shop or an office.

Is the ThinkPad Tablet 2 Worth It?

The ThinkPad Tablet 2 is an affordable business tablet that delivers a great inking experience that should make it the go to note-taking tablets for executives and office workers. The Atom processor limits performance but won’t slow down the target user, and it delivers great battery life in a very portable package. 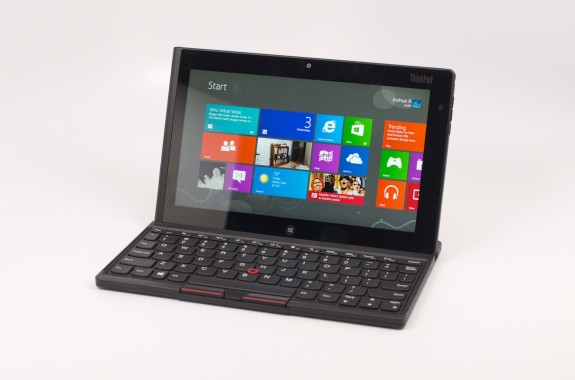 The 64GB ThinkPad Tablet is available for around $600 with the pen on Lenovo, which is comparable in cost to the iPad. There are broadband options available with built-in connectivity. It would be nice to see a keyboard included, but at $119, it isn’t out of reach either. 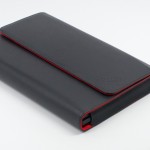 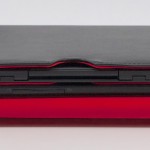 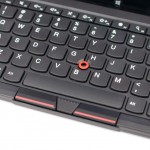 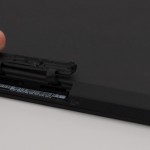 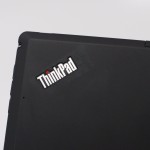 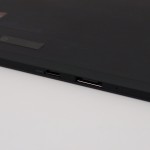 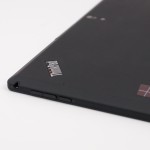 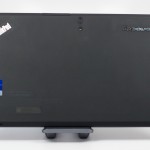