Phil over at Android Central pointed out a trend the community over there is experiencing with regards to apps bought from the Amazon App Store. It seems that Android devices are getting a little confused about who should handle updates when a new version of an app comes out.

…the Amazon Appstore app can see that you have an app installed and offer to unassociated it [from] that other market … so that you can get updates and such through its services instead.

Neither situation is ideal. And it’s unclear whether Amazon or Google know about it and will care enough to fix it. Add this to the many reasons why I give third-party app stores the side-eye on a regular basis. Amazon in particular. 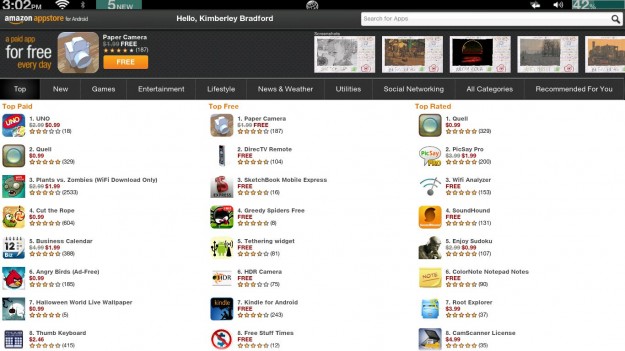 I stopped downloading Amazon’s free app of the day when I discovered that developers have had a hard time getting their money out of the company. Payouts don’t match the number of apps downloaded, according to the devs. And at least one company discovered that Amazon did not want to live up to their own contract terms.

Devs were promised that if they participated in the free app promotion that they would still get 20% of the money they would have made if customers paid full price for them. But after ShiftyJelly signed on, they discovered that Amazon did not want to pay them their 20%, and instead offered “valuable placement” as compensation.

Another annoyance I discovered with Amazon Apps is that if you move them manually from one Android device to another, the app won’t work unless the Amazon App Store is present on that device.

It’s not a huge problem to install the app, but it makes me wonder if someday Amazon will refuse to let me download something I’ve bought because I’ve put it on too many devices. Something similar happened with Kindle books, so this isn’t just random paranoia.

It also irks me that currently most Android apps don’t provide you with an independent key once you buy them. Switching between phones and other devices with the Android Market is no problem because you can re-download purchased apps. But switch over to a device that doesn’t have the Android Market, like the Nook Color, Nook Tablet, or Kindle Fire, and you have to purchase that app all over again.

For expensive apps, like QuickOffice, this is really annoying.

Some tablets that come with the Android Market also include an app store run by the manufacturer — Lenovo, Toshiba, and Samsung come to mind. This makes even less sense to me because the selection in these stores isn’t as robust as the market and very few offer a compelling reason to use them.

Lenovo is an exception as their store has apps that were tested for Lenovo’s tablets specifically to ensure that they work. And for ThinkPad users, the app store can be controlled by the IT department, which is valuable. If everyone else offered something similar, this wouldn’t be so eyeroll-worthy.

Just think, a few years ago we hoped for alternate app stores worth our time. Now we’ve got app store fragmentation. Wonderful.

Since most Android tablets come with the Android Market, I see less need for these third party stores. For end-users, anyway. For tablets that don’t come with the Market, it would be so wonderful if customers weren’t backed in to double dipping.