There are a gazillion posts today reporting the news from comScore that Amazon’s Kindle Fire has 54.4% of the Android Tablet market. You can check out the news of that here in Shawn’s post. While we all need to take any news like this with some skepticism, sadly for Google and Android Tablet fans, this news was as predictable as Apple analysts missing on their predictions on Apple’s financial results. Why was it predictable? Well, there are several reasons. 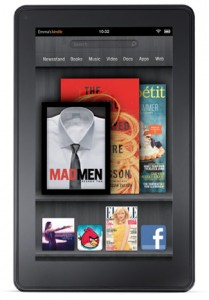 First, Amazon didn’t do what every other Android Tablet maker does. It didn’t try to compete with Apple’s iPad. Instead Amazon launched a device that was targeted for folks who don’t want Tablets, computers, smartphones, or anything else with any hint of complexity. There’s no hint of the Android operating system, unless you want to look for it. The device does what it does and does it well and users can do what they need to do without worrying about how the device works.

Second, Amazon played the price game smartly. You can call it limited functionality for a lower price, or you can more accurately, in my opinion, call it smart marketing. Note that we’re hearing about other cheap Android Tablets coming lately.

Third, Amazon, like Apple, launched after it had its ecosystem and customer loyalty already built. It’s not trying to build around the device from scratch (or from the ashes of previous failed efforts).

And finally, Amazon realized, again, like Apple, that folks (other than geeks) want simplicity above all else when they use these devices. Amazon delivered on that expectation with the Kindle Fire. Other Android Tablet makers still don’t get it. I’m afraid we’re headed there as well with Microsoft’s Windows 8 Tablets, regardless of the flavor (RT or regular).

Both Amazon and Apple have figured out this game. The rest are still struggling to get a clue as they try to make this market work like the markets of old. (Hint, those days are gone.) Don’t get me wrong, I still hope we’ll see successes in the future. I just don’t think the business models that Google and Microsoft, and those who are using their respective operating systems provide an opportunity for success. But then, Google’s model let to the Kindle Fire’s success, so what do I know.