The Threes iPhone game is a new matching sensation that puts previous matching games to shame thanks to an incredibly simple  to learn but difficult to master gameplay.

If you enjoy matching candies in Candy Crush, this game should scratch that itch, but instead of the mindless swiping it challenges users to think several moves ahead to stay alive and rack up a high score.

In Threes users must match up tiles to form larger numbers. 1 and 2 tiles go together to form a 3. Once you hit three you can only pair a number with the same number, doubling the value. This goes on and on as the numbers grow higher and make more room for smaller numbers. 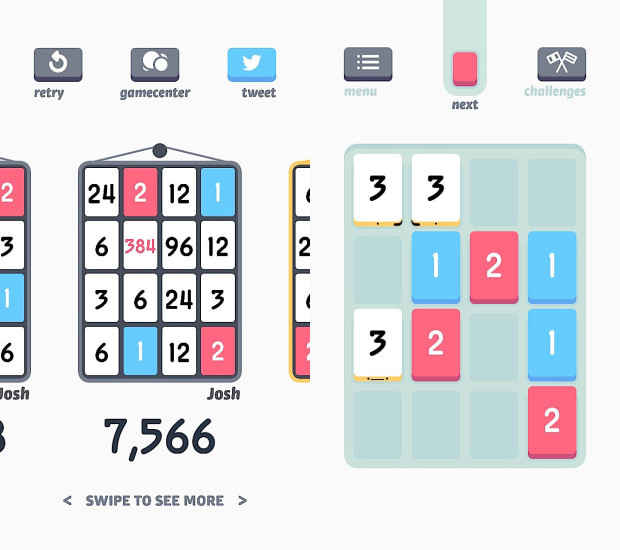 The Threes game tips and tricks will help you get a high score in this popular game.

The Threes game is $1.99 in the iTunes app store and is worth the price for anyone that likes a fun challenging matching game. After playing matching games for years, this is one of the most addicting we’ve run into.

A Threes game can take as little as a few minutes to play, but as you get better and develop a strategy games can last much longer as you push for a higher score matching bigger numbers.

The basics of the Threes game is simple, but there are a number of tips and tricks to help you get a higher score. There are no Threes cheats to hack a higher score, though looking at the leaderboard you might think they exist. The best advice is to forget the global leaderboard and play against your high score or your friend’s high scores.

The key to planning out your next move or match is to look at what is coming next. Each move adds a tile to the board and the game shows what is coming. Match this new tile to the spot on the board where you need that specific tile for a match. Not paying attention to this can lead to a stack of 1’s or 2’s that aren’t usable and ultimately end the game. 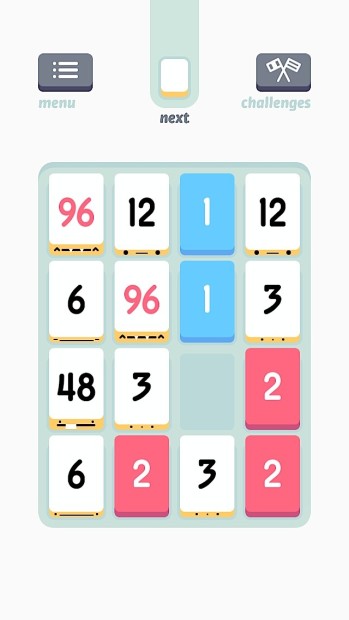 Pay attention to what’s coming next in the Threes game.

The white tile is normally a three, but every so often it is a higher number that is a fraction of the highest pair on the map. It’s hard to plan for this, but if you’ve seen threes for the past 10 white tiles, be ready for something larger. As you go higher you may even slide a 48 or higher tile onto the board.

When you are evaluating your next move you can slowly slide the tiles in each direction to see what the new board will look like. This slow slide is the easiest way to double or triple your current high score.

Just use your finger to slowly move the tiles and see where the other tiles end up. This is a key to moving big number tiles to a matching position when they are rows or columns apart.

The best advice we found is to use one corner to push your matches to. By playing Threes to a corner the big number matches will be close to each other when you match them instead of scattered across the board. 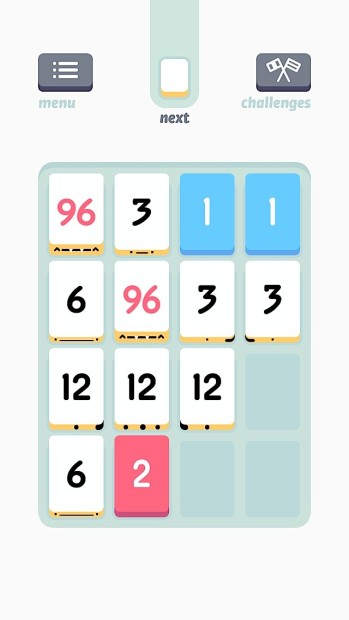 Moving all tiles to a corner is a good way to quickly build a big number.

To do this most moves will be in two directions. Don’t forget the other directions when you need to work a new match in, but focus on moving everything to one corner for an easier chance at a high score in the Threes game.

Line up a Row of Matches

If possible line up a row of matches that will stack up to a very big number. This could look like 3, 6, 12, 24, 48 and so on. With this lined up you can move through multiple tiles to get one big number and clear a lot of the board for smaller numbers to set up another matching run. 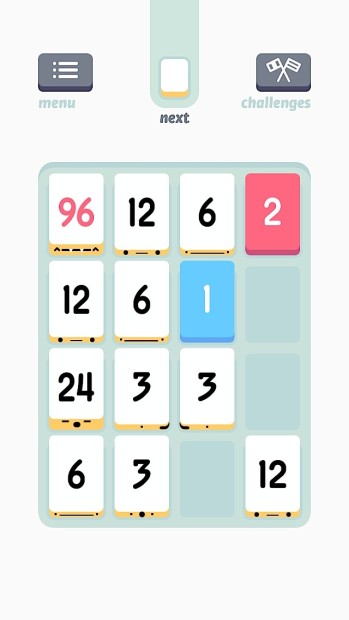 Line up several tiles to create an easy run up to a big match.

This takes some planning and you will need to move the bigger numbers into place as you play, but once you start to identify possible options three or four moves out it becomes second nature.

Watch Out for Matches That Aren’t Matchable

If you don’t use a corner strategy for the Threes game you need to watch out for higher numbers that you can’t match because they are lined up wrong. Often when we lose a game it’s due to three or four 12 or 24 tiles in a diagonal line that can’t be moved into matching formation. 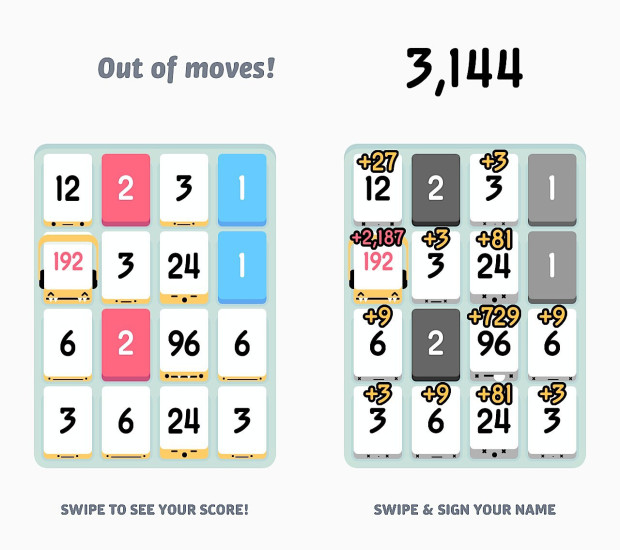 Watch out for big numbers that are not close enough to match or move.

To help avoid this use the slow move strategy to use a tile to help move numbers around the board. By placing one tile in the right spot it’s possible to move a big number to a new row or column.

Move Without a Match

Sometimes it is important to move without getting a match. This may be when setting up a run or when you need to move the larger numbers around to make a big match. 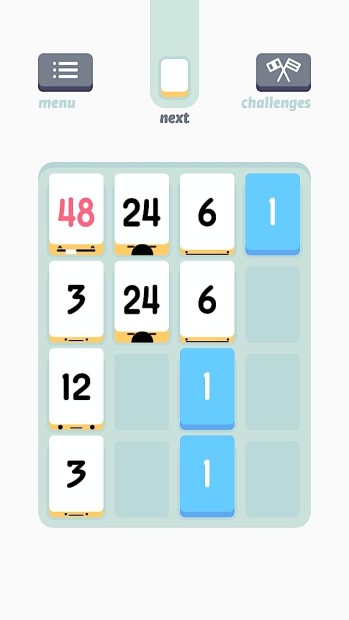 Sometimes you need to ignore a match for the same of a move.

When you are moving without a match pay attention to the new piece. If there is only one opening created from the direction you move it’s easy to know where it will land. If there are multiple openings the placement is random, so be ready to think before the next move.

Know When to Go Into Emergency Mode

With all the strategy and Threes game tips in the world you’ll still get to a point where you need to switch from the get higher matches mentality to a survival mode. When smaller matches get scarce, placement is getting bad and there are few open tiles, start looking for ways to clear the board and make a lot of matches even if they aren’t in corners. 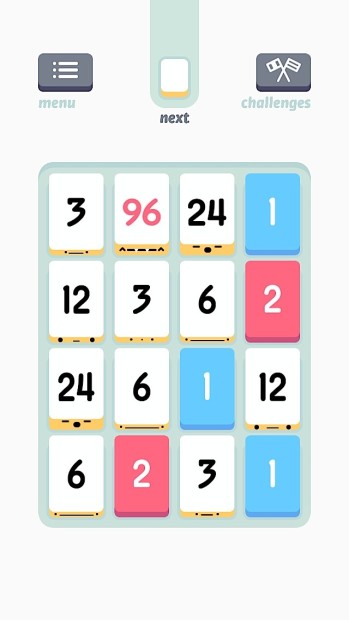 If the board is full or nearly full, focus on clearing it not on making big matches.

Look for the best way to make matches immediately from the new tiles and try to line up other matches from them. If the new tile is a 1, try to bring it in near a 2 that is also near a three rather than swiping it on randomly. This mode can help you quickly save a game that would have ended long ago.

Don’t forget you can also turn battery saver mode on for a longer gaming session, which is a key to a higher score.