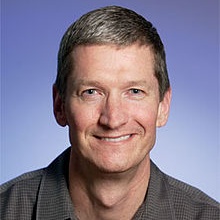 Oh, Tim Cook. Here I was thinking you’d be a pale stand-in for your ailing boss Steve Jobs, keeping the ship steady but avoiding rough seas. Well, glad to see you taking the wheel Jobs-style and making waves against the competition, if only to keep things interesting.

In yesterday’s Apple earnings call (which was huge, by the way), Cook was asked about the iPad’s competitors. He answered with this (via Engadget):

“if you look at what’s out there today, there’s not much. There’s the ones that use Windows, they’re generally big and heavy and expensive. They have weak battery life, they require a keyboard or a stylus as an input device, customers are frankly just not interested in them. Then you have Android tablets, and the varieties that are out shipping today, their operating system wasn’t designed for tablets. Google has said this, this isn’t just Apple saying this. That means you have the size of a tablet that just isn’t reasonable for what we call a ‘real tablet experience.’ That’s just a scaled-up smartphone, which is a bizarre product category. If you do a side-by-side with an iPad, you’ll pick an iPad.”

As long as you keep the word “today” in mind, he’s right about there not being much competition. Microsoft’s official word is that their real tablet strategy begins with the next version of Windows (I guess the Tablet PC was just practice). Same with Google and Android, except the next version, Android 3.0, is a lot closer to market. We saw a lot of tablets at CES, but we saw a lot last year too. Today, we’re looking at a lot of potential iPad competitors but few actual ones.

Good deflection by Cook (though he does later point out Apple is “not sitting still” and is “very, very confident with entering into a fight with anyone”), but the question was poor. A better question would have asked about the upcoming competition and how Apple intends to prepare for it. Android 3.0 is around the bend, will be designed for tablets, and does have major hardware vendors, such as Motorola and Samsung, ready to run with it. RIM and HP Palm are the two other major names to watch with their Playbook and PalmPad, respectively, inching closer to release. The current iPad won’t hold up to all that, and adding cameras alone won’t carry it. What the next iPad brings will be highly important for its future.

As for Microsoft, well, they’re giving Apple a lot of time to get ready for their “official” tablet-ready OS, and while Tablet PC sales reports are hard to come by, based on numbers from other years, I’m pretty sure 11 million iPads surpasses the number of Tablet PCs sold. Ever. Can’t say I can really blame people for not knowing Windows-based tablets exist. Cook may have slammed them, but at least he acknowledged them.