Though Tim Cook didn’t expressly reveal anything new regarding the future of Apple’s iOS mobile platform or the desktop Mac OS X operating system, the CEO did give us some insight about the executive shuffle at Apple and what that means for consumers.

When asked about senior vice president of iOS software Scott Forstall’s departure, Cook dodged the question and says that the changes were made to better align Apple’s hardware and software. 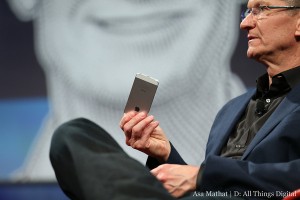 Image courtesy of All Things D

“I don’t want to talk about anybody in particular,” Cook answers Kara Swisher at the All Things D conference. “The whole concept was to tighten the groups even more so we could spend more time finding the magic at the intersections. I think it has been an incredibly great change.”

Apple’s clean and functional hardware is largely credited to Jony Ive, and more recently Ive has taken on the role of designing the software and UI as well for Apple after Forstall’s departure. Cook again teases about what that may mean for Apple.

“Jony had contributed significantly to the look and feel of Apple over many many years and could do that for our software as well,” Cook says while at the same time praising Ive as being “absolutely incredible.”

Cook notes that having Ive manage the hardware and software is part of this tighter integration, even if Apple has been marrying software and hardware for some time now.

This would match what we’ve read about iOS 7 in the past as well, shifting from Apple’s skeuomorphic design to a flatter, simpler design in a move where the software’s looks would be able to match the clean looks of the iPhone’s hardware.

And not only will the iOS software match the iOS hardware, but there will also be more continuity across all of Apple’s products, including its desktop platforms, laptops, and services.

Craig Federighi will be adding some unity between mobile and desktop as he is now tasked with overseeing both iOS and Mac software development. We’re going to see even more of Mac’s best features ported to the iPhone and iPad, and also we will see even more of iOS’s best practices being ported back to OS X.

Some of that has already happened, including key iWork and iLife applications on OS X being ported to iOS. From iOS, we’ve seen things like full screen apps, messaging center and notifications, and an app launcher ported to OS X.

And Apple’s services will see more cross-platform support as they are now being overseen by Eddy Cue. iTunes, iRadio and other services that are in being developed currently will span both platforms.

When the All Things D team asked for specifics about iOS 7 and OS X, Cook evaded the question.

“I think I will wait and let you see it,” Cook says, noting that new iOS and OS X services will debut in June at WWDC.