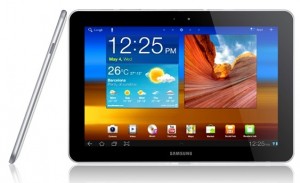 Though Samsung had stated earlier that it would release a special softare update to its Android 3.1 Honeycomb Galaxy Tab 10.1 slates to New York City patrons first, the company is only now announcing that the same update will be coming this Friday, August 5th, to owners of the company’s WiFi-only slates. Targeting the WiFi-only slate is an unusual move for Samsung this time around–usually software updates hit the cellular-enabled (3G, 4G) models of tablets before they reach the WiFi model, but Samsung is giving its early adopters a treat.

The update will bring Samsung’s proprietary TouchWiz UI, Adobe Flash Player 10.3, and Samsung’s Media Hub, which will allow consumers to download additional content. Also part of the package will be a revamped and enhanced clipboard app that will allow users to maintain a list of clippings, rather than a single clip, along with a new Photo Editor, the Swype keyboard, Amazon Cliud Music Player, Kindle, and Word with Friends.

When the tablet had debuted at the CTIA trade show in March of this year, Samsung had referred to the UI as the ‘Sasmung Experience,’ suggesting that the company may have moved away from its TouchWiz moniker. However, it appears that this isn’t the case and the two are used interchangeably. What’s noticeably different from the TouchWiz on Honeycomb tablets versus the TouchWiz on smartphones is that the former experience doesn’t over-dominate the Android experience. Rather, you get widgets that you can opt to not use if you don’t want to, along with subtle enhancements that help to complement rather than dominate the Android experience. On the smartphone experience, TouchWiz really does take over your phone as a truly skinned experience.

The update will also bring a number of enterprise enhancements, including better ActiveSync support and tighter security through encryption and VPN.

New York residents and visitors were able to get the update on August 3rd. At least the wait isn’t too long for those outside of the New York area.

In order to prep for the update, Samsung says you need to have a Samsung account, and the company has posted a detailed FAQ to get users ready for the update process.

Here are the full details about the update: