The Tweetbot iOS 7 release is here with the Tweetbot 3 name and a $3 introductory price for users who wish to use the new version of the popular Twitter app.

Tweetbot ‘s iOS 7 design is very nice to look at and matches the overall look of the iPhone at the same level as Apple’s own app’s as well as the Facebook app which was one of the first to offer a very integrated iOS 7 design.

In less than 24 hours Tweetbot 3 climbed to the top paid apps spot in the iPhone App Store as many users jumped to upgrade to the new version. Not all users were happy to see the Tweetbot iOS 7 release, arguing that the developer should have released the new version as a free upgrade. Apple released OS X Mavericks free this week, as well as many other software tools for users who buy a new Mac or a new iPhone, adding to the expectation of users that software come free, but Tweetbot is easily worth the $3 upgrade price.

The video below shows off the new design of Tweetbot 3 for iOS 7, including the new access to lists and other features present in the app.

There is no Tweetbot 3 for iPad at this time, but that will likely come later as a separate purchase. The original Tweetbot for iPad sells for $3, so we may see similar pricing for the IOS 7 Tweetbot iPad app.

The new Tweetbot iOS 7 design is heavy on white, bringing a lighter look to the software. tapping on a tweet turns it black and pulls up response options. Users can swipe a Tweet to the left shows the conversation to let users dive into more than just a tweet. 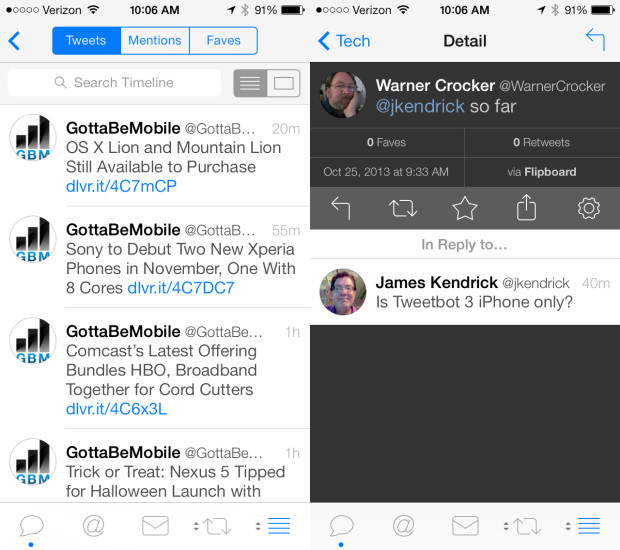 The Tweetbot iOS 7 release is here as Tweetbot 3, for $3.

One feature that could be worth the price alone is background fetching. With Background App Refresh on this new version of Tweetbot should show users updates as soon as they open the app, instead of waiting for a refresh. Other updates include push and in app notifications, the ability to mute a hashtag or user and timeline sync between multiple devices using Tweetbot.

Users can also customize the tab bar by holding down on the last two options to pick the info that is most important to them. This is where lists live, and after a few hours of use, upgraders will be at home switching between the lists.

Tweetbot 3 is available in the App Store for $2.99