Yes, I am writing to inform you about a single Twitter App for Android that has a dot release update. I normally wouldn’t do this, but I love Twitter and I love trying new Twitter apps. I especially love when a Twitter app adds a really cool feature. There are other Twitter apps that do voice tweets, but Tweetcaster Pro is my app of choice and I really liked having this feature. I used to have voice tweets within another app that escapes my mind back when I was rocking the Moto Atrix.

Tweetcaster was updated to 5.6 a couple of days ago, but it was just pushed to my Galaxy Nexus today. This update added what they are calling, “Speak Tweets”. After the update, I ran Tweetcaster Pro and was alerted to the new feature and then when I got ready to test it, another notification alerting me of this feature. I tapped the icon (below) and, with a southern drawl, I said, “testing a voice tweet with tweetcaster”. Believe it or not, it got it just right. Many of the voice recognition engines have a problem with my thick accent. If I had Siri, it would tell me it doesn’t understand me. 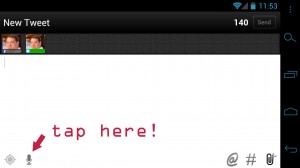 If you haven’t tried Tweetcaster, there is a free version and a paid version. I love this app and promptly paid for the pro (paid) version. Josh Smith didn’t like Tweetcaster much though. He  didn’t like its cartoony looks and the immense amount of options it offers.

TweetCaster boasts a bright & clean look, lightning fast speed, and more features than any other Twitter app. No wonder millions of users have downloaded it worldwide! Optimized for both phones and tablets, TweetCaster is the perfect app, no matter what device you are using.