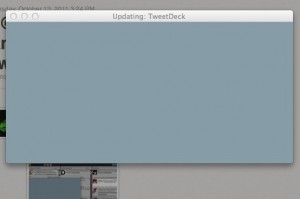 Goodness gracious I’m trying very heard not to use any well-placed or ill conceived invective here. It’s hard. It is gawl-darned hard, let me tell you.

Tweetedeck was always one of those Twitter tools that took its cue from Twitters enormous success and equally enormous fail-whale like failures. When Twitter bought Tweetdeck it seemed like a marriage made in heaven. Although many assume Twitter spent the money to keep Tweetdeck from becoming bigger than its own aims.

Well, I’m guessing Twitter is happy that they are , fouling things up so royally of late. I think it was last week that Adobe announced an update to its Air platform that Tweetdeck runs on. Shortly thereafter I started seeing a big blank notice pop up that Tweetdeck is Updating. Well, that never happened. Then Adobe eventually pushed through the Air update. The notice stopped for awhile, but its been back with a vengeance.

Who knows what is really going on, but you’d think somewhere inside Twitter or Tweetdeck there would be someone with enough pride in what they were doing to fix the darn thing. Intriguingly I’ve tweeted about it, but that hasn’t drawn a peep from anyone. Which just proves that no one is home on either team.

UPDATE: I feel a little better, but not much. According to a post on Business Insider, Twitter honcho Iain Dodsworth is blaming the problem on Adobe Air and says to get rid of the annoying box of nothingness the best thing to do is to download the update and install it from here.