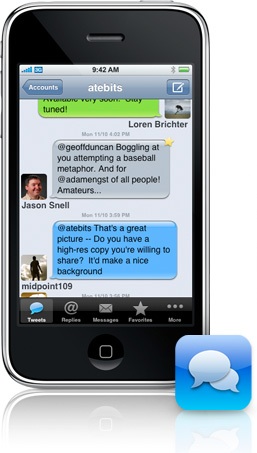 Twitter finally has its own iPhone application.  How?  Well, they went out and bought Tweetie.  Tweetie is a $2.99 iPhone app, which in a few weeks will be rebranded as the official free Twitter client for the iPhone. The developer who created Tweetie, Loren Brichter, will join the Twitter team to create an iPad version of Tweetie as well.  This will make many Twitter users happy as there has been some chatter on why there wasnt an iPad version of a Twitter app ready (like Tweetie and Twitterific).

Twitter also has version of their application ready for Blackberry (finally).  The official BlackBerry app is free to download from BlackBerry.com/Twitter.  The features of Twitter on Blackberry include real-time BlackBerry push of direct messages, @replies notifications and browser integration for tweeting links. Also there is camera and photo gallery integration, lists, search for users, content and trending topics, and customizable interface fonts and tool bars. A cool feature is the inbox integration that lets you read Twitter direct messages alongside your email and text messages.  This will give Blackberry users a true unified inbox for all their communications. 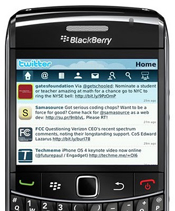 Time to see what happens next in the Twitter evolution.